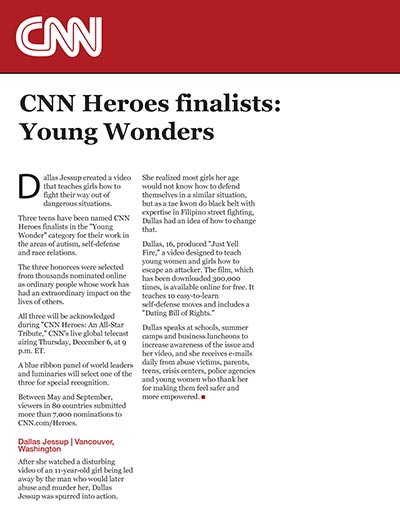 Dallas Jessup created a video that teaches girls how to fight their way out of dangerous situations.

(CNN) -- Three teens have been named CNN Heroes finalists in the "Young Wonder" category for their work in the areas of autism, self-defense and race relations.

The three honorees were selected from thousands nominated online as ordinary people whose work has had an extraordinary impact on the lives of others.

A blue ribbon panel of world leaders and luminaries will select one of the three for special recognition.

Between May and September, viewers in 80 countries submitted more than 7,000 nominations to CNN.com/Heroes.

The three individuals chosen for an "outstanding achievement by a person under the age of 18" are:

Kayla Cornale wanted to be closer to Lorena, her autistic younger cousin, who because of her disorder was unable to communicate at the same level as the rest of her close-knit family.

Kayla, 18, observed her cousin's keen ability to memorize songs and devised a way to teach her how to talk, read and express emotions through melodies played on a piano.

Kayla assigned a letter of the alphabet to the center-most keys of the piano, and by linking language to sounds created a breakthrough in autism research. Kayla's patented system, "Sounds into Syllables," has won top awards at several international science fairs, captured the attention of autism researchers and is being tested in several Ontario school districts.

By linking chords with emotions, Kayla has opened the door to communication for Lorena and others.

After she watched a disturbing video of an 11-year-old girl being led away by the man who would later abuse and murder her, Dallas Jessup was spurred into action.

She realized most girls her age would not know how to defend themselves in a similar situation, but as a tae kwon do black belt with expertise in Filipino street fighting, Dallas had an idea of how to change that.

Dallas, 16, produced "Just Yell Fire," a video designed to teach young women and girls how to escape an attacker. The film, which has been downloaded 300,000 times, is available online for free. It teaches 10 easy-to-learn self-defense moves and includes a "Dating Bill of Rights."

Dallas speaks at schools, summer camps and business luncheons to increase awareness of the issue and her video, and she receives e-mails daily from abuse victims, parents, teens, crisis centers, police agencies and young women who thank her for making them feel safer and more empowered.

Concerned about racial tension and equality at Santa Monica High School, Josh Miller, 17, established the "Resilient Youth Foundation," a student-run nonprofit group dedicated to motivating high school students of all backgrounds to succeed in school and in life.

Josh's passion for evoking positive change increased when his teammate, classmate and good friend Eddie Lopez was killed in a drive-by shooting.

Despite the two friends' diverse backgrounds, they often discussed difficult topics and even aspired to tackle racial tensions that divided their school. As a star athlete with a 4.0 GPA, Eddie had hoped to be the first in his family to attend college.

When Eddie was killed, Josh established a scholarship program to recognize students with Eddie's drive for excellence.

Josh continued tackling many of the problems he and Eddie discussed by producing a documentary and creating a program called "Rewards for Results," which targets at-risk middle school students and rewards them for improving their grades.

More than 700 students have improved their GPAs, work ethic and citizenship as a result, and five Eddie Lopez scholarships have been awarded to deserving students.