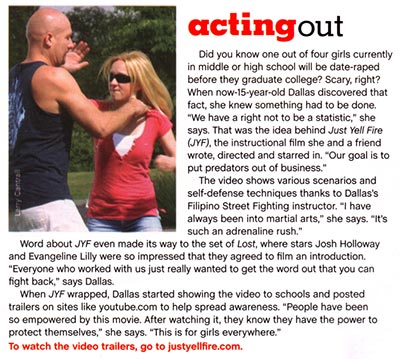 Did you know one out of four girls currently in middle or high school will be date-raped before they graduate college? Scary, right? When now-15-year-old Dallas discovered that fact, she knew something had to be done. ~We have a right not to be a statistic," she says. That was the idea behind Just Yell Fire (JYF), the instructional film she and a friend wrote, directed and starred in. "Our goal is to put predators out of business."

The video shows various scenarios and self-defense techniques thanks to Dallas's Filipino Street Fighting instructor. "I have always been into martial arts," she says. "It's such an adrenaline rush."

Word about JYF even made its way to the set of Lost, where stars Josh Holloway and Evangeline lilly were so impressed that they agreed to film an introduction. "Everyone who worked with us just really wanted to get the word out that you can fight back," says Dallas.

When JYF wrapped, Dallas started showing the video to schools and posted trailers on sites like youtube.com to help spread awareness. "People have been so empowered by this movie. After watching it, they know they have the power to protect themselves," she says. "This is for girls everywhere."