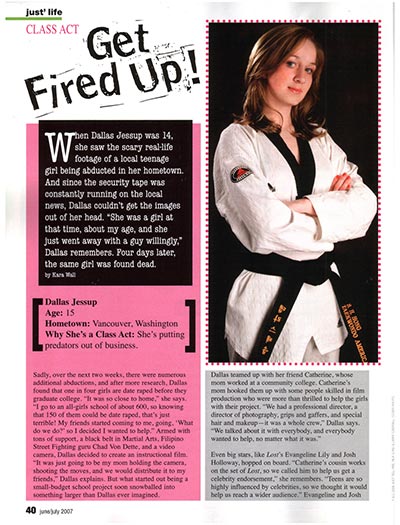 Why She's a Class Act: She's putting predators out of business.

Learning to protect yourself against kidnapping and rape could be the difference between becoming a statistic...and coming home tonight.

When Dallas Jessup was 14, she saw the scary real-life footage of a local teenage girl being abducted in her hometown. And since the security tape was constantly running on the local news, Dallas couldn't get the images out of her head. "She was a girl at that time, about my age, and she just went away with a guy willingly," Dallas remembers. Four days later, the same girl was found dead.

Sadly, over the next two weeks, there were numerous additional abductions, and after more research, Dallas found that one in four girls are date raped before they graduate college. "It was so close to home," she says. "I go to an all-girls school of about 600, so knowing that 150 of them could be date raped, that's just terrible! My friends started coming to me, going, 'What do we do?' so I decided I wanted to help." Armed with tons of support, a black belt in Martial Arts, Filipino Street Fighting guru Chad Von Dette, and a video camera, Dallas decided to create an instructional film. "It was just going to be my mom holding the camera, shooting the moves, and we would distribute it to my friends," Dallas explains. But what started out being a small-budget school project soon snowballed into something larger than Dallas ever imagined.

Dallas teamed up with her friend Catherine, whose mom worked at a community college. Catherine's mom hooked them up with some people skilled in film production who were more than thrilled to help the girls with their project. "We had a professional director, a director of photography, grips and gaffers, and special hair and makeup - it was a whole crew," Dallas says. "We talked about it with everybody, and everybody wanted to help, no matter what it was."

Even big stars, like Lost's Evangeline Lily and Josh Holloway, hopped on board. "Catherine's cousin works on the set of Lost, so we called him to help us get a celebrity endorsement," she remembers. "Teens are so highly influenced by celebrities, so we thought it would help us reach a wider audience." Evangeline and Josh were gung-ho about helping, and they can be seen offering important bits of wisdom at the beginning and the end of the film.

Before Dallas knew it, Just Yell Fire was born. "The name 'Just Yell Fire' came from Chad Von Dette," she explains. "When he was little his dad told him to yell 'Fire!' because people will look in your direction. It sounds horrible, but people are worried about themselves, whereas if you yell 'Help,' it's something people hear on a day-to-day basis, so no one knows if you're kidding or not. Yelling 'I'm being taken!' or 'I'm being raped!' will probably frighten people off. Yelling 'Fire!' is a way to get their attention and it also triggers your getaway instincts."

Dallas knows that gut feelings are way more important than most people realize. She says that the secret to staying safe is "definitely about following your instincts. If you instincts tell you something is bad, then it probably is." And thanks to Dallas's film, a lot more girls will learn to trust themselves - and stay safe.

Although Dallas originally started the project with hopes of keeping her friends safe, she's now focused on empowering girls all over the world. "I had no idea this little project would grow to be a professionally-done movie!" she exclaims. "We go to school and people are coming up to us and thanking us for making them feel safer and saying that they can walk down the street without feeling afraid. It's just amazing how many people are accepting this movie. We didn't think it would be reaching really faraway places lik Iraq and Africa and New Zealand and Australia, but it is!"

Now that the video is available to everyone as a free download at justyellfire.com, Dallas's main goal is spreading the word - and she's not stopping until every girl has seen it. "We've gone to local high schools and elementary schools, we've been on every local radio show, as well as Montel, Fox News Live, and Good Morning America. I want to make sure every girl in the world has the capacity to protect themselves."

Dallas's work is paying off. Even though many attempted abductions or date rapes go unreported, she's had some feedback from would-be victims.

"One girl said that the movie helped her friend get home safely - and if she hadn't seen the movie, she might not be here today. She was fourteen," Dallas recalls. "I also have one friend who was asked if she wanted to see this guy's kittens. She remembered the 5-foot safety circle (which is taught on the video) and thankfully wasn't taken. And that's just the stuff we've heard."

Hopefully, millions more will be hearing Dallas's message. "You're strong, you shouldn't be afraid to go out somewhere," Dallas proclaims. And, thanks to her efforts, girls will now know how to stand up against attackers.