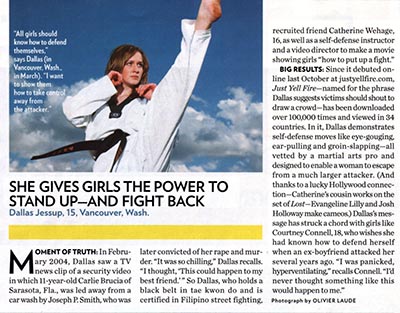 Moment of Truth: In February 2004, Dallas saw a TV news clip of a security video in which 11-year-old Carlie Brucia of Sarasota, Fla. was led away from a car wash by Joseph P. Smith, who was later convicted of her rape and murder. "It was so chilling," Dallas recalls. "I thought, 'This could happen to my best friend.'" So Dallas, who holds a black belt in tae kwon do and is certified in Filipino street fighting, recruited friend Catherine Wehage, 16, as well as a self-defense instructor and a video director to make a movie showing girls "how to put up a fight."

Big Results: Since it debuted online last October at justyellfire.com, Just Yell Fire - named for the phrase Dallas suggests victims should shout to draw a crowd - has been downloaded over 100,000 times and viewed in 34 countries. In it, Dallas demonstrates self-defense moves like eye-gouging, ear-pulling and groin-slapping - all vetted by a martial arts pro and designed to enable a woman to escape from a much larger attacker. (And thanks to a lucky Hollywood connection - Catherine's cousin works on the set of Lost - Evangeline Lilly and Josh Holloway make cameos.) Dallas's message has struck a chord with girls like Courtney Connell, 18, who wishes she had known how to defend herself when an ex-boyfriend attacked her several years ago. "I was panicked, hyperventilating," recalls Connell. "I'd never thought something like this would happen to me."