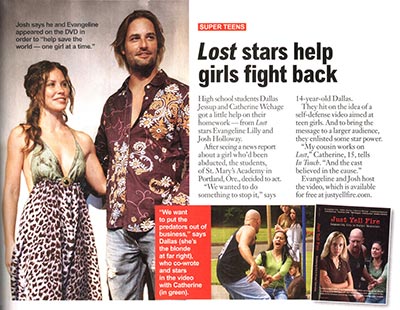 High school students Dallas Jessup and Catherine Wehage got a little help on their homework - from Lost stars Evangeline Lilly and Josh Holloway.

After seeing a news report about a girl who'd been abducted, the students, of St. Mary's Academy in Portland, Ore., decided to act.

"We wanted to do something to stop it," says 14-year-old Dallas.

They hit on the idea of a self-defense video aimed at teen girls. And to bring the message to a larger audience, they enlisted some star power.

"My cousin works on Lost,"Catherine, 15, tells In Touch. "And the cast believed in the cause."

Evangeline and Josh host the video, which is available for free at justyellfire.com.

Josh says he and Evangeline appeared on the DVD in order to "help save the world - one girl at a time."