The 'Just Yell Fire' Approach to Self Defense 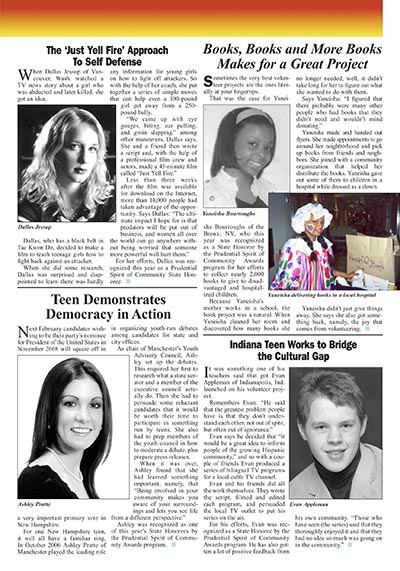 The Prudential Spirit of Community Awards
Summer 2007, Vol. 4 No. 2
excerpt:

When Dallas Jessup of Vancouver, Wash. watched a TV news story about a girl who was abducted and later killed, she got an idea.

Dallas, who has a black belt in Tae Kwon Do, decided to make a film to teach teenage girls how to fight back against an attacker.

When she did some research, Dallas was surprised and disappointed to learn there was hardly any information for young girls on how to fight off attackers. So with the help of her coach, she put together a series of simple moves that can help even a 100-pound girl get away from a 250-pound bully.

“We came up with eye gouges, biting, ear pulling, and groin slapping,” among other maneuvers, Dallas says. She and a friend then wrote a script and, with the help of a professional film crew and actors, made a 45-minute film called “Just Yell Fire.”

Less than three weeks after the film was available for download on the Internet, more than 14,000 people had taken advantage of the opportunity. Says Dallas: “The ultimate impact I hope for is that predators will be put out of business, and women all over the world can go anywhere without being worried that someone more powerful will hurt them.”

For her efforts, Dallas was recognized this year as a Prudential Spirit of Community State Honoree.