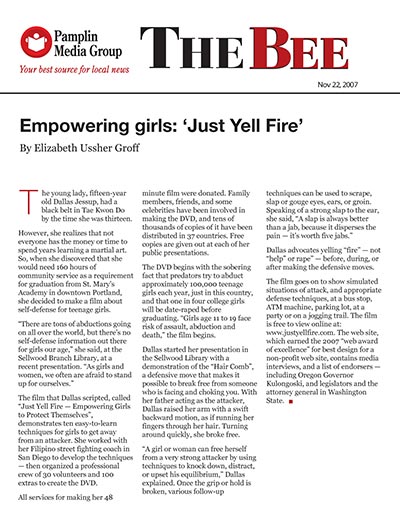 The young lady, fifteen-year old Dallas Jessup, had a black belt in Tae Kwon Do by the time she was thirteen.

However, she realizes that not everyone has the money or time to spend years learning a martial art. So, when she discovered that she would need 160 hours of community service as a requirement for graduation from St. Mary’s Academy in downtown Portland, she decided to make a film about self-defense for teenage girls.

“There are tons of abductions going on all over the world, but there’s no self-defense information out there for girls our age,” she said, at the Sellwood Branch Library, at a recent presentation. “As girls and women, we often are afraid to stand up for ourselves.”

The film that Dallas scripted, called “Just Yell Fire — Empowering Girls to Protect Themselves”, demonstrates ten easy-to-learn techniques for girls to get away from an attacker. She worked with her Filipino street fighting coach in San Diego to develop the techniques — then organized a professional crew of 30 volunteers and 100 extras to create the DVD.

All services for making her 48 minute film were donated. Family members, friends, and some celebrities have been involved in making the DVD, and tens of thousands of copies of it have been distributed in 37 countries. Free copies are given out at each of her public presentations.

The DVD begins with the sobering fact that predators try to abduct approximately 100,000 teenage girls each year, just in this country, and that one in four college girls will be date-raped before graduating. “Girls age 11 to 19 face risk of assault, abduction and death,” the film begins.

Dallas started her presentation in the Sellwood Library with a demonstration of the “Hair Comb”, a defensive move that makes it possible to break free from someone who is facing and choking you. With her father acting as the attacker, Dallas raised her arm with a swift backward motion, as if running her fingers through her hair. Turning around quickly, she broke free.

“A girl or woman can free herself from a very strong attacker by using techniques to knock down, distract, or upset his equilibrium,” Dallas explained. Once the grip or hold is broken, various follow-up techniques can be used to scrape, slap or gouge eyes, ears, or groin. Speaking of a strong slap to the ear, she said, “A slap is always better than a jab, because it disperses the pain — it’s worth five jabs.”

Dallas advocates yelling “fire” — not “help” or rape” — before, during, or after making the defensive moves.

The film goes on to show simulated situations of attack, and appropriate defense techniques, at a bus stop, ATM machine, parking lot, at a party or on a jogging trail. The film is free to view online at: www.justyellfire.com. The web site, which earned the 2007 “web award of excellence” for best design for a non-profit web site, contains media interviews, and a list of endorsers — including Oregon Governor Kulongoski, and legislators and the attorney general in Washington State.

Photo Caption: Two seconds before this photo was taken, Dallas’ attacker (her father, Jay Jessup, was playing the part) had approached Dallas from behind – as in a situation where she might be at an ATM machine – and grabbed her around the neck. Practicing the “stick ’em up” move, Dallas thrust her arms straight up into the air and turned around quickly, releasing the hold and freeing her hands for a disabling slap to the ear or slice across the eye. Dallas says that when your life is endangered, you can't worry about hurting your attacker.