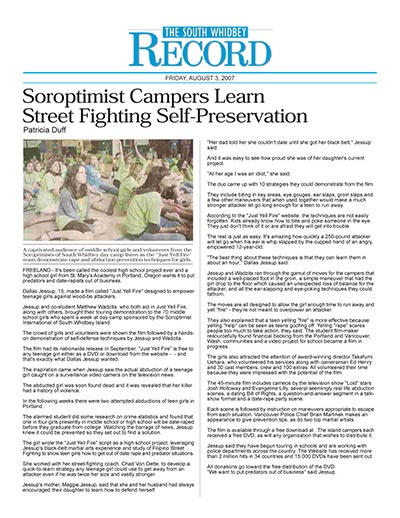 A captivated audience of middle school girls and volunteers from the Soroptimists of South Whidbey day camp listen as the "Just Yell Fire" team demonstrate rape and abduction prevention techniques for girls.

FREELAND - It's been called the coolest high school project ever and a high school girl from St. Mary's Academy in Portland, Oregon wants it to put predators and date-rapists out of business.

Jessup and co-student Matthew Wadzita, who both act in Just Yell Fire, along with others, brought their touring demonstration to the 70 middle school girls who spent a week at day camp sponsored by the Soroptimist International of South Whidbey Island.

The crowd of girls and volunteers were shown the film followed by a handson demonstration of self-defense techniques by Jessup and Wadzita.

The film had its nationwide release in September. "Just Yell Fire" is free to any teenage girl either as a DVD or download from the website - - and that's exactly what Dallas Jessup wanted.

The inspiration came when Jessup saw the actual abduction of a teenage girl caught on a surveillance video camera on the television news.

The abducted girl was soon found dead and it was revealed that her killer had a history of violence.

In the following weeks there were two attempted abductions of teen girls in Portland.

The alarmed student did some research on crime statistics and found that one in four girls presently in middle school or high school will be date-raped before they graduate from college. Watching the barrage of news, Jessup knew it could be prevented so they set out to find a solution.

The girl wrote the "Just Yell Fire" script as a high school project, leveraging Jessup's black-belt martial arts experience and study of Filipino Street Fighting to show teen girls how to get out of date rape and predator situations.

She worked with her street-fighting coach, Chad Von Dette, to develop a quick-to-learn strategy any teenage girl could use to get away from an attacker even if he was twice her size and vastly stronger.

Jessup's mother, Maggie Jessup, said that she and her husband had always encouraged their daughter to learn how to defend herself. "Her dad told her she couldn't date until she got her black belt," Jessup said.

And it was easy to see how proud she was of her daughter's current project.

The duo came up with 10 strategies they could demonstrate from the film.

They include biting in key areas, eye gouges, ear slaps, groin slaps and a few other maneuvers that when used together would make a much stronger attacker let go long enough for a teen to run away.

According to the "Just Yell Fire" website, the techniques are not easily forgotten. Kids already know how to bite and poke someone in the eye. They just don't think of it or are afraid they will get into trouble.

The rest is just as easy. It's amazing how quickly a 250-pound attacker will let go when his ear is whip slapped by the cupped hand of an angry, empowered 12-year-old.

"The best thing about these techniques is that they can learn them in about an hour," Dallas Jessup said.

Jessup and Wadzita ran through the gamut of moves for the campers that included a well-placed foot in the groin, a simple maneuver that had the girl drop to the floor which caused an unexpected loss of balance for the attacker, and all the ear-slapping and eye-poking techniques they could fathom.

The moves are all designed to allow the girl enough time to run away and yell "fire" - they're not meant to overpower an attacker.

They also explained that a teen yelling "fire" is more effective because yelling "help" can be seen as teens goofing off. Yelling "rape" scares people too much to take action, they said. The student film-maker resourcefully found financial backing from the Portland and Vancouver, Wash. communities and a video project for school became a film in progress.

The girls also attracted the attention of award-winning director Takafumi Uehara, who volunteered his services along with cameraman Ed Henry and 30 cast members, crew and 100 extras. All volunteered their time because they were impressed with the potential of the film.

Each scene is followed by instruction on maneuvers appropriate to escape from each situation. Vancouver Police Chief Brian Martinek makes an appearance to give prevention tips, as do two top martial artists.

The film is available through a free download at . The island campers each received a free DVD, as will any organization that wishes to distribute it.

Jessup said they have begun touring in schools and are working with police departments across the country. The Website has received more than 2 million hits in 34 countries and 15,000 DVDs have been sent out.

All donations go toward the free distribution of the DVD. "We want to put predators out of business" said Jessup.