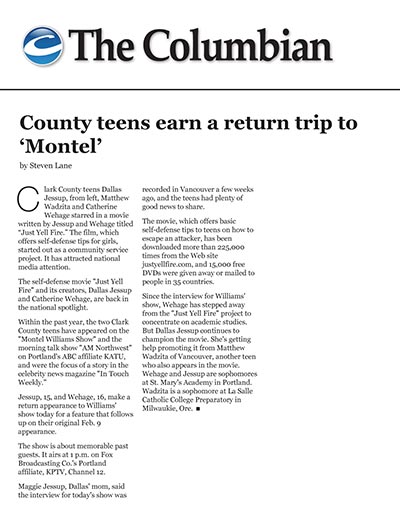 Clark County teens Dallas Jessup, from left, Matthew Wadzita and Catherine Wehage starred in a movie written by Jessup and Wehage titled “Just Yell Fire.” The film, which offers self-defense tips for girls, started out as a community service project. It has attracted national media attention.

The self-defense movie "Just Yell Fire" and its creators, Dallas Jessup and Catherine Wehage, are back in the national spotlight.

Within the past year, the two Clark County teens have appeared on the "Montel Williams Show" and the morning talk show "AM Northwest" on Portland's ABC affiliate KATU, and were the focus of a story in the celebrity news magazine "In Touch Weekly."

Jessup, 15, and Wehage, 16, make a return appearance to Williams' show today for a feature that follows up on their original Feb. 9 appearance.

The show is about memorable past guests. It airs at 1 p.m. on Fox Broadcasting Co.'s Portland affiliate, KPTV, Channel 12.

Maggie Jessup, Dallas' mom, said the interview for today's show was recorded in Vancouver a few weeks ago, and the teens had plenty of good news to share.

The movie, which offers basic self-defense tips to teens on how to escape an attacker, has been downloaded more than 225,000 times from the Web site justyellfire.com, and 15,000 free DVDs were given away or mailed to people in 35 countries.

Since the interview for Williams' show, Wehage has stepped away from the "Just Yell Fire" project to concentrate on academic studies. But Dallas Jessup continues to champion the movie. She's getting help promoting it from Matthew Wadzita of Vancouver, another teen who also appears in the movie. Wehage and Jessup are sophomores at St. Mary's Academy in Portland. Wadzita is a sophomore at La Salle Catholic College Preparatory in Milwaukie, Ore.

Next up: Dallas Jessup will be interviewed for a seven-minute segment that will appear on a future episode of a talk show on the Hallmark Channel.