excerpt from In Your Neighborhood 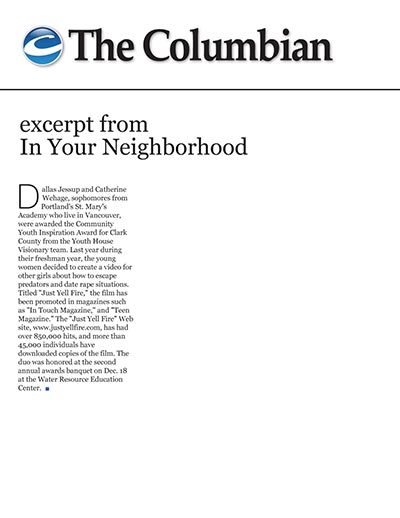 Central Vancouver: Minnehaha and The Heights

Columbia Way: Dallas Jessup and Catherine Wehage, sophomores from Portland's St. Mary's Academy who live in Vancouver, were awarded the Community Youth Inspiration Award for Clark County from the Youth House Visionary team. Last year during their freshman year, the young women decided to create a video for other girls about how to escape predators and date rape situations. Titled "Just Yell Fire," the film has been promoted in magazines such as "In Touch Magazine," and "Teen Magazine." The "Just Yell Fire" Web site, www.justyellfire.com, has had over 850,000 hits, and more than 45,000 individuals have downloaded copies of the film. The duo was honored at the second annual awards banquet on Dec. 18 at the Water Resource Education Center.