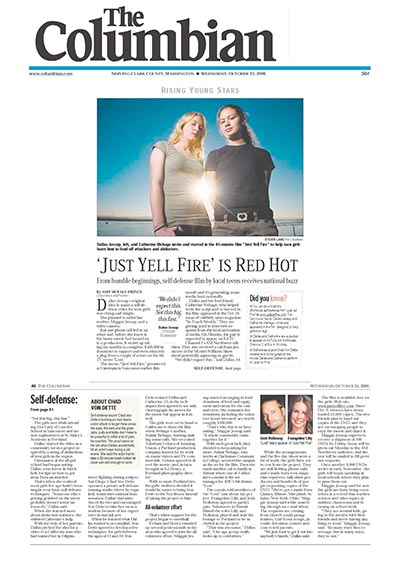 Wednesday Columbian, Pages A1 & A8

Dallas Jessup's original idea to make a self-defense video for teen girls was cheap and simple.

She planned to enlist her mother, Maggie Jessup, and a video camera.

But one phone call led to another and, before she knew it, the home movie had turned into a production. It ended up taking six months to complete, $500,000 in donations to support and even attracted a plug from a couple of actors on the hit TV series “Lost.”

The movie, “Just Yell Fire,” premiered at Cinetopia in Vancouver earlier this month and it’s generating some media buzz nationally.

Dallas and her best friend, Catherine Wehage, who helped write the script and co-starred in the film, appeared in the Oct. 16 issue of celebrity news magazine“In Touch Weekly.” They are getting used to interview requests from the local and national media. On Monday, the pair is expected to appear on KATU Channel 2’s AM Northwest talk show. They also received a call from producers of the Montel Williams Show about potentially appearing as guests.

The girls met while attending Our Lady of Lourdes School in Vancouver and are now sophomores at St. Mary’s Academy in Portland.

Dallas started the video as a community service project inspired by a string of abductions of teen girls in the region.

Classmates at the all-girl school had began asking Dallas, a tae kwon do black belt, for tips on how to get away from an attacker.

That’s when she realized most girls her age hadn’t been taught even basic self-defense techniques. “Someone who’s getting grabbed on the street probably doesn’t know tae kwon do,” Dallas said.

When she learned more about abduction statistics, she enlisted Catherine’s help.

With the help of her parents, Dallas pitched the idea for a video to a California man who had trained her in Filipino street fighting during a trip to San Diego. Chad Von Dette operates a private self-defense training studio where he regularly trains international businessmen. Dallas’ dad introduced the two and encouraged Von Dette to take her on as a student because of her experience in martial arts.

When he learned what Dallas wanted to accomplish, Von Dette agreed to develop a few techniques for girls between the ages of 11 and 19. Von Dette trained Dallas and Catherine, 15, in the techniques then agreed to not only choreograph the moves for the movie but appear in it as well.

The girls were set to head to California to shoot the film when Wehage’s mother, Aulani Wehage, starting making some calls. She recruited Takafumi Uehara of Amazing Vision, a Portland production company known for its work on music videos and TV commercials. Uehara agreed to direct the movie, and, in turn, brought in Ed Henry, a Portland photography director.

With so many Portland ties, the girls’ mothers decided it would be easier to bring Von Dette to the Northwest instead of taking the project to him.

That’s when support for the project began to snowball.

Uehara and Henry rounded up several professionals in the area who agreed to join the allvolunteer effort. Maggie Jessup started arranging in-kind donations of food and equipment and extras for the cast and crew. She estimates the donations, including the volunteer hours invested, are worth roughly $500,000.

“That’s why this is so fascinating,” Maggie Jessup said.“A whole community came together for it.”

With such great luck, they decided to keep asking for more. Aulani Wehage, who works at Clackamas Community College, secured the campus as the set for the film. Then she made another call to family in Hawaii where one of Catherine’s cousins is the set manager for ABC’s hit drama “Lost.”

The cousin told members of the “Lost” cast about the project. Evangeline Lilly and Josh Holloway agreed to participate. Volunteers in Hawaii filmed the roles Lilly and Holloway played and sent the footage to Portland to be included in the project.

“That was awesome,” Dallas said. “Our age group really looks up to celebrities.”

While the arrangements and the five-day shoot were a lot of work, the girls have yet to rest from the project. They are still fielding phone calls and e-mails from teen magazine reporters, talk show producers and hundreds of people requesting copies of the DVD. “We’ve got e-mails from Quincy, Illinois; Maryland, Atlanta, New York, Ohio,” Maggie Jessup said while searching through an e-mail inbox. The requests are coming from church youth group leaders, Girl Scout troops, juvenile detention centers and concerned parents.

“We just want to get it out into anybody’s hands,” Dallas said.

The film is available free on the girls’ Web site, www.justyellfire.com. Since Oct. 6, viewers have downloaded 23,000 copies. The two friends plan to hand out copies of the DVD, and they are encouraging people to copy the movie and share it.

Maggie Jessup expects to receive a shipment of 500 DVDs by Friday. Some will be given out Monday to the AM Northwest audience, and the rest will be mailed to fill previous requests.

Once another 9,000 DVDs arrive in early November, the girls will begin speaking at local schools where they plan to pass them out.

Maggie Jessup said for now the girls are busy being counselors at a school that teaches science and other topics in outdoor classrooms and focusing on school work.

“They are normal kids, going to the movies with their friends and never having anything to wear,” Maggie Jessup said. “In many ways they’re average, but in many ways, they’re not.”