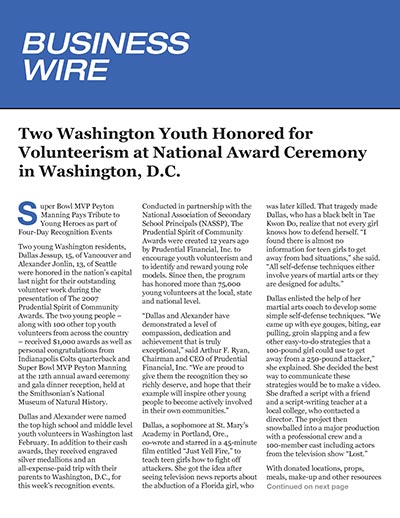 WASHINGTON.--(BUSINESS WIRE)--Two young Washington residents, Dallas Jessup, 15, of Vancouver and Alexander Jonlin, 13, of Seattle were honored in the nation’s capital last night for their outstanding volunteer work during the presentation of The 2007 Prudential Spirit of Community Awards. The two young people – along with 100 other top youth volunteers from across the country – received $1,000 awards as well as personal congratulations from Indianapolis Colts quarterback and Super Bowl MVP Peyton Manning at the 12th annual award ceremony and gala dinner reception, held at the Smithsonian’s National Museum of Natural History.

Dallas and Alexander were named the top high school and middle level youth volunteers in Washington last February. In addition to their cash awards, they received engraved silver medallions and an all-expense-paid trip with their parents to Washington, D.C., for this week’s recognition events.

Conducted in partnership with the National Association of Secondary School Principals (NASSP), The Prudential Spirit of Community Awards were created 12 years ago by Prudential Financial, Inc. to encourage youth volunteerism and to identify and reward young role models. Since then, the program has honored more than 75,000 young volunteers at the local, state and national level.

“Dallas and Alexander have demonstrated a level of compassion, dedication and achievement that is truly exceptional,” said Arthur F. Ryan, Chairman and CEO of Prudential Financial, Inc. “We are proud to give them the recognition they so richly deserve, and hope that their example will inspire other young people to become actively involved in their own communities.”

Dallas, a sophomore at St. Mary’s Academy in Portland, Ore., co-wrote and starred in a 45-minute film entitled “Just Yell Fire,” to teach teen girls how to fight off attackers. She got the idea after seeing television news reports about the abduction of a Florida girl, who was later killed. That tragedy made Dallas, who has a black belt in Tae Kwon Do, realize that not every girl knows how to defend herself. “I found there is almost no information for teen girls to get away from bad situations,” she said. “All self-defense techniques either involve years of martial arts or they are designed for adults.”

With donated locations, props, meals, make-up and other resources worth more than $500,000, the film was shot in five days and debuted soon after at www.justyellfire.com. Dallas’ Web site has had more than 2 million “hits,” over 100,000 girls have downloaded the film, and messages of thanks and praise have arrived from teens, parents, police agencies and violence shelters in 50 states and 34 foreign countries. Dallas also has promoted her film in the national media and on a speaking tour of schools. “The ultimate impact I hope for is that predators will be put out of business, and women all over the world can go anywhere without the fear that someone more powerful will hurt them,” said Dallas.

In 2004, Alexander convinced a state senator that his idea was worthwhile. Together, they drafted and introduced a bill to create the Washington State Legislative Youth Advisory Council. Alexander researched youth councils in other states, and came up with the specifics for a bill. He then traveled around the state to lobby for the bill’s passage, and testified at hearings. Despite some opposition, the bill was enacted by the legislature and signed by the governor, but with an expiration date of July 2007 for the council. As a member of the new council, Alexander is working on issues important to young people, and is lobbying to pass another bill that would extend the youth council’s term. “So many people have great ideas, but they think that no one will listen to them and that it will never become a reality,” said Alexander. “But if you try hard enough, you can do it.”

Applications for the 2007 awards program were submitted last fall through schools, Girl Scout councils, county 4-H organizations, American Red Cross chapters, YMCAs and Volunteer Centers affiliated with the Points of Light Foundation. The top middle level and high school applicants in each state and the District of Columbia were announced in February. These 102 State Honorees are in Washington this week with their parents for four days of special recognition events.

Ten of the 102 were named America’s top ten youth volunteers for 2007 at the U.S. Chamber of Commerce headquarters today. These National Honorees received additional $5,000 awards, gold medallions, crystal trophies for the schools or organizations that nominated them, and $5,000 grants from The Prudential Foundation for charities of their choice.

The ten National Honorees are:

Kendall Ciesemier, 14, of Wheaton, Ill., an eighth-grader at Franklin Middle School, who formed a nonprofit organization that has raised $80,000 since 2004 through Web site donations and T-shirt sales to benefit AIDS orphans in Africa.

Kelly Davis, 18, of West Bath, Maine, a senior at Morse High School in Bath, who spearheaded the enactment of a state law allowing third-party nonprofit organizations to raise money for the police, and then raised more than $40,000 to purchase a bulletproof vest for every working police dog in Maine.

Anna DeSanctis, 13, of Houston, Texas, an eighth-grader at Holy Spirit Episcopal School, who raised more than $22,000 to create libraries at four orphanages in the region of China where she was born.

Bryce Pfeiffer, 14, of Raton, N.M., a member of the Colfax County 4-H and a home-schooled seventh-grader, who led a project to purchase and install a handicapped-accessible fishing dock on a lake at a local state park.

Robert Rasmussen, 14, of Hutchinson, Minn., a seventh-grader at Hutchinson Middle School, who made more than 600 cement markers to place at the graves of all U.S. veterans in a local cemetery, providing a permanent memorial to their sacrifice.

Mollie Singer, 18, of Las Vegas, Nev., a senior at Nevada State High School in Henderson, who has helped raise public support and more than $100,000 for diabetes research since she was diagnosed with the disease at age 4.

Jourdan Urbach, 15, of Roslyn Heights, N.Y., a home-schooled sophomore and a student at the Juilliard School’s Pre-College Division in New York City, who has used his reputation and acclaimed abilities as a violinist to raise more than $1.3 million for national charities focused on neurological illnesses.

Kelydra Welcker, 18, of Parkersburg, W.Va., a senior at Parkersburg South High School, who invented a way to purify drinking water in her community by developing a test for the presence of a controversial industrial compound, and then creating a method for removing the chemical from water.

Heather Wilder, 13, of Las Vegas, Nev., a seventh-grader at Ernest Becker Middle School, who has written a series of 10 booklets to help foster children understand and cope with their situations, based on her own experiences as a foster child.

The National Honorees were chosen by a national selection committee that was co-chaired by U.S. Senator Norm Coleman of Minnesota and Arthur Ryan of Prudential. Also serving on the committee were actor Richard Dreyfuss; Alma Powell, Chair of America’s Promise – The Alliance for Youth; Robert Goodwin, former President and CEO of the Points of Light Foundation; Amy B. Cohen, Director of Learn and Serve America at the Corporation for National and Community Service; Kathy Cloninger, CEO of Girl Scouts of the USA; Donald T. Floyd Jr., President and CEO of National 4-H Council; Michael Cohen, President and CEO of Achieve, Inc.; Kathryn Forbes, National Chair of Volunteers, American Red Cross; Joe Militello, President of NASSP; and two 2006 Prudential Spirit of Community National Honorees: Geneva Johnson of the Bronx, N.Y., a student at Binghamton University, and Ajay Mangal of Pascagoula, Miss., a student at Columbia University.

NASSP President Joe Militello said: “Every year, the Prudential Spirit of Community Awards program brings out some of the best and brightest youth in the country. This year is no exception as we take another welcomed opportunity to honor these young people for displaying great character and leadership as they try to effect positive changes in their communities, this nation and the world.”

More information about The Prudential Spirit of Community Awards and this year’s honorees can be found at www.prudential.com/spirit or www.principals.org/prudential.

Prudential Financial, Inc. (NYSE: PRU), a financial services leader with approximately $616 billion of assets under management as of December 31, 2006, has operations in the United States, Asia, Europe, and Latin America. Leveraging its heritage of life insurance and asset management expertise, Prudential is focused on helping individual and institutional customers grow and protect their wealth. The company’s well-known Rock symbol is an icon of strength, stability, expertise and innovation that has stood the test of time. Prudential’s businesses offer a variety of products and services, including life insurance, annuities, retirement-related services, mutual funds, asset management, and real estate services. For more information, please visit www.prudential.com.