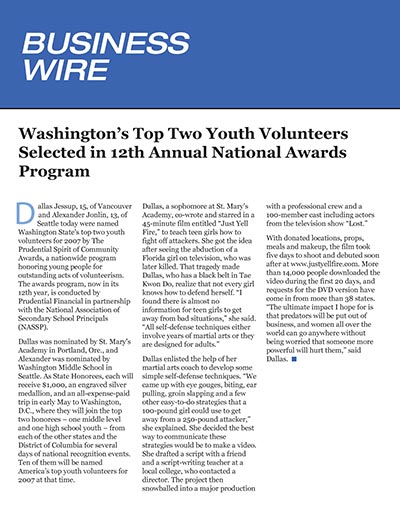 Honors also bestowed on other top youth volunteers in Washington

OLYMPIA, Wash.--(BUSINESS WIRE)--Dallas Jessup, 15, of Vancouver and Alexander Jonlin, 13, of Seattle today were named Washington State's top two youth volunteers for 2007 by The Prudential Spirit of Community Awards, a nationwide program honoring young people for outstanding acts of volunteerism. The awards program, now in its 12th year, is conducted by Prudential Financial in partnership with the National Association of Secondary School Principals (NASSP).

Dallas was nominated by St. Mary's Academy in Portland, Ore., and Alexander was nominated by Washington Middle School in Seattle. As State Honorees, each will receive $1,000, an engraved silver medallion, and an all-expense-paid trip in early May to Washington, D.C., where they will join the top two honorees – one middle level and one high school youth – from each of the other states and the District of Columbia for several days of national recognition events. Ten of them will be named America’s top youth volunteers for 2007 at that time.

Dallas, a sophomore at St. Mary’s Academy, co-wrote and starred in a 45-minute film entitled “Just Yell Fire,” to teach teen girls how to fight off attackers. She got the idea after seeing the abduction of a Florida girl on television, who was later killed. That tragedy made Dallas, who has a black belt in Tae Kwon Do, realize that not every girl knows how to defend herself. “I found there is almost no information for teen girls to get away from bad situations,” she said. “All self-defense techniques either involve years of martial arts or they are designed for adults.”

With donated locations, props, meals and makeup, the film took five days to shoot and debuted soon after at www.justyellfire.com. More than 14,000 people downloaded the video during the first 20 days, and requests for the DVD version have come in from more than 38 states. “The ultimate impact I hope for is that predators will be put out of business, and women all over the world can go anywhere without being worried that someone more powerful will hurt them,” said Dallas.

In 2004, Alexander convinced a state senator that his idea was worthwhile. Together, they drafted and introduced a bill to create the Washington State Legislative Youth Advisory Council. Alexander researched youth councils in other states, and came up with the specifics for a bill. He then traveled around the state to lobby for the bill’s passage, and testified at hearings. Despite some opposition, the bill was enacted by the legislature and signed by the governor, but with an expiration date for the council of July 2007. As a member of the new council, Alexander is working on issues important to young people, and is lobbying to pass another bill that would extend the youth council’s term. “So many people have great ideas, but they think that no one will listen to them and that it will never become a reality,” said Alexander. “But if you try hard enough, you can do it.”

“People as caring and committed as these young students are critical to the future of our neighborhoods, our cities and our nation,” said Arthur Ryan, chairman and CEO of Prudential. “By recognizing these honorees, we hope to encourage other young people – our future leaders – and all Americans to think more about the value and importance of volunteering in their communities.”

“NASSP is pleased to once again join Prudential in recognizing these young people for their amazing accomplishments,” remarked Gerald N. Tirozzi, executive director of the National Association of Secondary School Principals. “This year’s honorees are proof that the youth of today are conscientious and capable of performing selfless acts of kindness in their local communities, on a national scale and at the global level.”

All public and private middle level and high schools in the country, as well as all Girl Scout councils, county 4-H organizations, American Red Cross chapters, YMCAs and Volunteer Centers, were eligible to select a student or member for a local Prudential Spirit of Community Award this past November. More than 7,500 Local Honorees were then reviewed by state-level judges, who selected State Honorees and Distinguished Finalists based on criteria such as personal initiative, creativity, effort, impact and personal growth.

While in Washington, D.C., the 102 State Honorees will tour the capital’s landmarks, attend a gala awards ceremony at the Smithsonian’s National Museum of Natural History, and visit their congressional representatives on Capitol Hill. In addition, 10 of them – five middle level and five high school students – will be named National Honorees on May 7 by a prestigious national selection committee. These honorees will receive additional $5,000 awards, gold medallions, crystal trophies, and $5,000 grants from The Prudential Foundation for nonprofit, charitable organizations of their choice.

The Prudential Spirit of Community Awards represent the United States’ largest youth recognition program based solely on volunteer service. The program is part of a broad youth-service initiative by Prudential that includes a youth leadership training program administered by the Points of Light Foundation; a free booklet of volunteer ideas for young people offered through the Federal Citizen Information Center; and a Web site featuring profiles of outstanding youth volunteers, volunteer tips and project ideas for students, an electronic newspaper on youth volunteerism, and more (www.prudential.com/spirit). The Spirit of Community Awards program also is conducted by Prudential subsidiaries in Japan, South Korea and Taiwan, and is being introduced this year in Ireland.

For information on all of this year’s Prudential Spirit of Community State Honorees and Distinguished Finalists, visit www.prudential.com/spirit or www.principals.org/prudential.