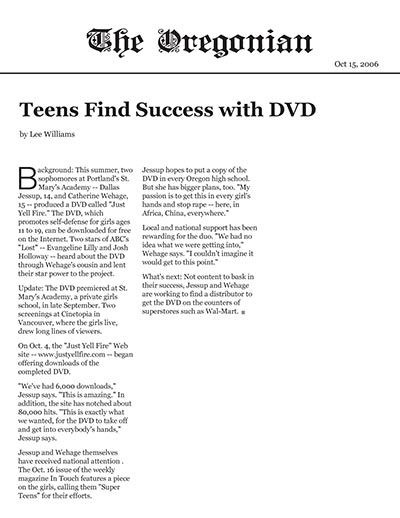 Background: This summer, two sophomores at Portland's St. Mary's Academy -- Dallas Jessup, 14, and Catherine Wehage, 15 -- produced a DVD called "Just Yell Fire." The DVD, which promotes self-defense for girls ages 11 to 19, can be downloaded for free on the Internet. Two stars of ABC's "Lost" -- Evangeline Lilly and Josh Holloway -- heard about the DVD through Wehage's cousin and lent their star power to the project.

Update: The DVD premiered at St. Mary's Academy, a private girls school, in late September. Two screenings at Cinetopia in Vancouver, where the girls live, drew long lines of viewers.

Jessup and Wehage themselves have received national attention . The Oct. 16 issue of the weekly magazine In Touch features a piece on the girls, calling them "Super Teens" for their efforts.

Jessup hopes to put a copy of the DVD in every Oregon high school. But she has bigger plans, too. "My passion is to get this in every girl's hands and stop rape -- here, in Africa, China, everywhere."

Local and national support has been rewarding for the duo. "We had no idea what we were getting into," Wehage says. "I couldn't imagine it would get to this point."

What's next: Not content to bask in their success, Jessup and Wehage are working to find a distributor to get the DVD on the counters of superstores such as Wal-Mart.