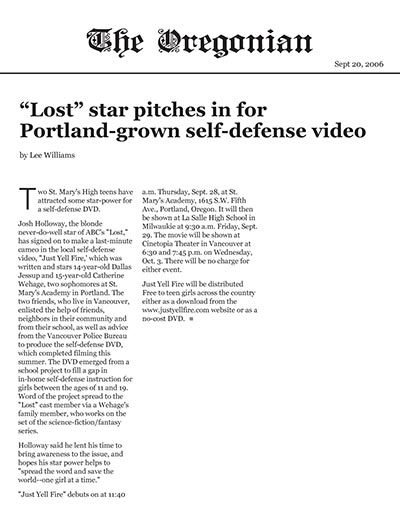 Two St. Mary's High teens have attracted some star-power for a self-defense DVD.

Josh Holloway, the blonde never-do-well star of ABC's "Lost," has signed on to make a last-minute cameo in the local self-defense video, "Just Yell Fire,' which was written and stars 14-year-old Dallas Jessup and 15-year-old Catherine Wehage, two sophomores at St. Mary's Academy in Portland. The two friends, who live in Vancouver, enlisted the help of friends, neighbors in their community and from their school, as well as advice from the Vancouver Police Bureau to produce the self-defense DVD, which completed filming this summer. The DVD emerged from a school project to fill a gap in in-home self-defense instruction for girls between the ages of 11 and 19. Word of the project spread to the "Lost" cast member via a Wehage's family member, who works on the set of the science-fiction/fantasy series.

Holloway said he lent his time to bring awareness to the issue, and hopes his star power helps to "spread the word and save the world--one girl at a time."

Just Yell Fire will be distributed Free to teen girls across the country either as a download from the www.justyellfire.com website or as a no-cost DVD.