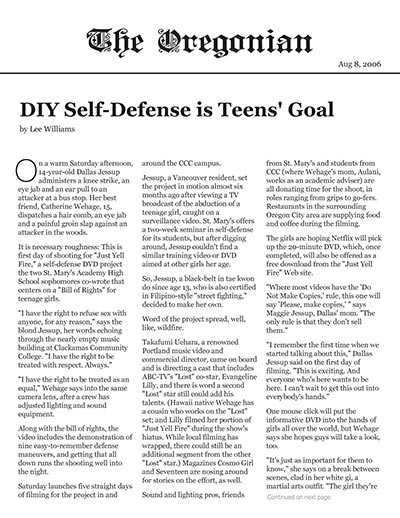 On a warm Saturday afternoon, 14-year-old Dallas Jessup administers a knee strike, an eye jab and an ear pull to an attacker at a bus stop. Her best friend, Catherine Wehage, 15, dispatches a hair comb, an eye jab and a painful groin slap against an attacker in the woods.

It is necessary roughness: This is first day of shooting for "Just Yell Fire," a self-defense DVD project the two St. Mary's Academy High School sophomores co-wrote that centers on a "Bill of Rights" for teenage girls.

"I have the right to be treated as an equal," Wehage says into the same camera lens, after a crew has adjusted lighting and sound equipment.

Along with the bill of rights, the video includes the demonstration of nine easy-to-remember defense maneuvers, and getting that all down runs the shooting well into the night.

Saturday launches five straight days of filming for the project in and around the CCC campus.

Jessup, a Vancouver resident, set the project in motion almost six months ago after viewing a TV broadcast of the abduction of a teenage girl, caught on a surveillance video. St. Mary's offers a two-week seminar in self-defense for its students, but after digging around, Jessup couldn't find a similar training video or DVD aimed at other girls her age.

So, Jessup, a black-belt in tae kwon do since age 13, who is also certified in Filipino-style "street fighting," decided to make her own.

Takafumi Uehara, a renowned Portland music video and commercial director, came on board and is directing a cast that includes ABC-TV's "Lost" co-star, Evangeline Lilly, and there is word a second "Lost" star still could add his talents. (Hawaii native Wehage has a cousin who works on the "Lost" set; and Lilly filmed her portion of "Just Yell Fire" during the show's hiatus. While local filming has wrapped, there could still be an additional segment from the other "Lost" star.) Magazines Cosmo Girl and Seventeen are nosing around for stories on the effort, as well.

Sound and lighting pros, friends from St. Mary's and students from CCC (where Wehage's mom, Aulani, works as an academic adviser) are all donating time for the shoot, in roles ranging from grips to go-fers. Restaurants in the surrounding Oregon City area are supplying food and coffee during the filming.

The girls are hoping Netflix will pick up the 20-minute DVD, which, once completed, will also be offered as a free download from the "Just Yell Fire" Web site.

"Where most videos have the 'Do Not Make Copies,' rule, this one will say 'Please, make copies,' " says Maggie Jessup, Dallas' mom. "The only rule is that they don't sell them."

"I remember the first time when we started talking about this," Dallas Jessup said on the first day of filming. "This is exciting. And everyone who's here wants to be here. I can't wait to get this out into everybody's hands."

One mouse click will put the informative DVD into the hands of girls all over the world, but Wehage says she hopes guys will take a look, too.

"It's just as important for them to know," she says on a break between scenes, clad in her white gi, a martial arts outfit. "The girl they're dating is someone's daughter, someone's sister."

In researching their script (written and rewritten between their regular classwork) the two -- who have been friends since fifth grade at Our Lady of Lourdes Elementary School -- uncovered some daunting numbers: Nationally 4,600 stranger abductions take place each year; of those, 91 percent end in death within 24 hours. Crime Against Children Resource Center, based in New Hampshire, cites girls between ages 12 to 17 as being at the greatest risk for nonfamily abduction. The video also addresses date and acquaintance rape, which posts even higher stats:

"One in four girls will be date-raped by the time they graduate college," Wehage says. "And I remember thinking: That's 150 girls out of the 600 who go to my school." Wehage went before the CCC's board to ask to use the school's space for the five days of shooting.

Wehage also is a student in Filipino street fighting, is learning with Dallas' coach, Chad Von Dette, who adapted the fighting maneuvers for the DVD's defensive strategies. Mastering traditional martial arts techniques takes time, and the girls, Von Dette says, were looking for moves that could memorized and dispatched both quickly and effectively. Von Dette's strategies border on the instinctual.

"Biting, eye gouges, kicking to the groin -- these are techniques that won't be forgotten during an attack or date-rape situation. And they work," says Von Dette, who flew to Portland from San Diego-based V.I.P.E.R. Training Academy to participate in the filming. Filipino style-street fighting also involves "Kina mutai," or biting techniques.

"The gouges, eye-pokes . . . girls already know how to do this. The DVD just gives them permission," says Maggie Jessup, who, along with Dallas' dad, required their daughter to take a self-defense course before dating. "And some people might say you're teaching the girls to fight like animals. But what do you call the ones attacking them?"

What won over Vancouver Police Chief Brian Martinek -- who has since changed jobs and is moving to Portland to become an assistant to Police Chief Rosie Sizer -- was the instruction in "Just Yell Fire" for girls 11 to 18 "in prevention as well as reaction."

"There's a lot of good common sense in the DVD," says Martinek, highlighting two themes he's seen in the project's script and meetings with the girls: "One, it teaches girls not put themselves in these situations, and two, how to draw attention to yourself if they are in such a situation." (The DVD's title comes from studies showing that "Fire!" has proven to be better attention-getting yell than the words "Help" and "Rape," which are often ignored by passers-by.)

"We do outreach to schools and talk about 'Stranger Danger,' but this might be even better," Martinek says, citing the convenience of the free download. "It's an admirable project. And I told the girls, 'You have to know you're doing something right when so many people are putting in their time, effort, talent and passion, and not getting paid for it."

Throughout the filming, the two friends bump their fists in encouragement as they switch spots in front of the camera. The experience appears to be bringing them closer, though Jessup denies it. "No way," she says. "We couldn't be any closer."

And take after take, the two moms watch their daughters on a small TV monitor during filming. "Our babies our growing up," Maggie Jessup says at one point, hugging Aulani Wehage.

"And kicking butt," whispers a crew member, before being shushed with a "Quiet on the set!"

"Just Yell Fire" is aimed for completion later this summer; the Web site www.justyellfire.com is still being built. For more information in the meanwhile, see www.escapetogetsafe.com.