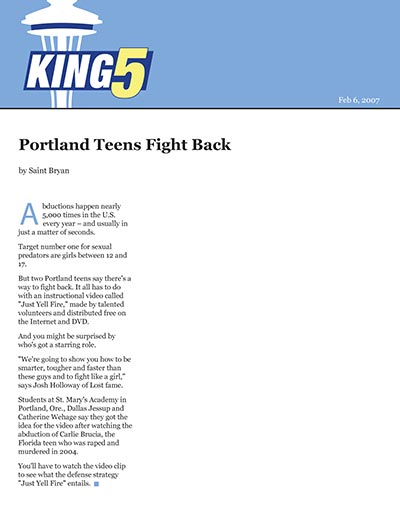 Abductions happen nearly 5,000 times in the U.S. every year – and usually in just a matter of seconds.

Target number one for sexual predators are girls between 12 and 17.

But two Portland teens say there's a way to fight back. It all has to do with an instructional video called "Just Yell Fire," made by talented volunteers and distributed free on the Internet and DVD.

And you might be surprised by who's got a starring role.

"We're going to show you how to be smarter, tougher and faster than these guys and to fight like a girl," says Josh Holloway of Lost fame.

Students at St. Mary's Academy in Portland, Ore., Dallas Jessup and Catherine Wehage say they got the idea for the video after watching the abduction of Carlie Brucia, the Florida teen who was raped and murdered in 2004.

You'll have to watch the video clip to see what the defense strategy "Just Yell Fire" entails.