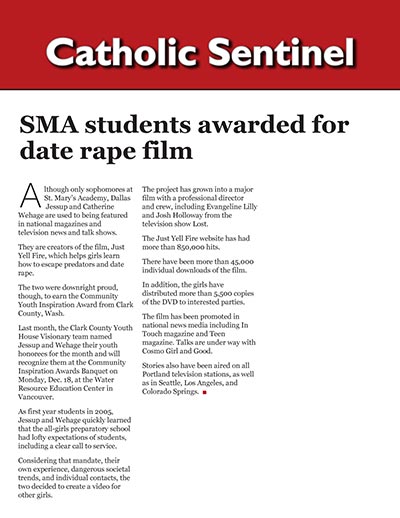 Although only sophomores at St. Mary’s Academy, Dallas Jessup and Catherine Wehage are used to being featured in national magazines and television news and talk shows.

They are creators of the film, Just Yell Fire, which helps girls learn how to escape predators and date rape.

The two were downright proud, though, to earn the Community Youth Inspiration Award from Clark County, Wash.

Last month, the Clark County Youth House Visionary team named Jessup and Wehage their youth honorees for the month and will recognize them at the Community Inspiration Awards Banquet on Monday, Dec. 18, at the Water Resource Education Center in Vancouver.

As first year students in 2005, Jessup and Wehage quickly learned that the all-girls preparatory school had lofty expectations of students, including a clear call to service.

Considering that mandate, their own experience, dangerous societal trends, and individual contacts, the two decided to create a video for other girls.

The project has grown into a major film with a professional director and crew, including Evangeline Lilly and Josh Holloway from the television show Lost.

There have been more than 45,000 individual downloads of the film.

In addition, the girls have distributed more than 5,500 copies of the DVD to interested parties.

The film has been promoted in national news media including In Touch magazine and Teen magazine. Talks are under way with Cosmo Girl and Good.

Stories also have been aired on all Portland television stations, as well as in Seattle, Los Angeles, and Colorado Springs.