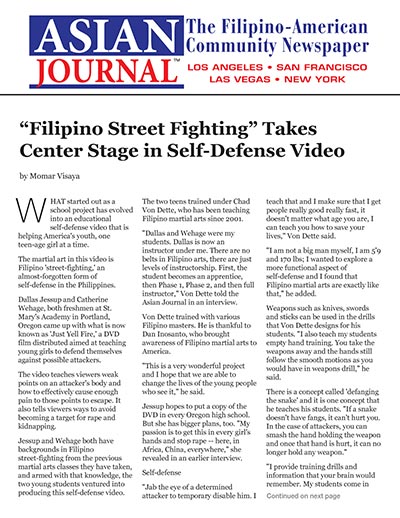 WHAT started out as a school project has evolved into an educational self-defense video that is helping America's youth, one teen-age girl at a time.

The martial art in this video is Filipino 'street-fighting,' an almost-forgotten form of self-defense in the Philippines.

Dallas Jessup and Catherine Wehage, both freshmen at St. Mary's Academy in Portland, Oregon came up with what is now known as 'Just Yell Fire,' a DVD film distributed aimed at teaching young girls to defend themselves against possible attackers.

The video teaches viewers weak points on an attacker's body and how to effectively cause enough pain to those points to escape. It also tells viewers ways to avoid becoming a target for rape and kidnapping.

Jessup and Wehage both have backgrounds in Filipino street-fighting from the previous martial arts classes they have taken, and armed with that knowledge, the two young students ventured into producing this self-defense video.

The two teens trained under Chad Von Dette, who has been teaching Filipino martial arts since 2001.

"Dallas and Wehage were my students. Dallas is now an instructor under me. There are no belts in Filipino arts, there are just levels of instructorship. First, the student becomes an apprentice, then Phase 1, Phase 2, and then full instructor," Von Dette told the Asian Journal in an interview.

Von Dette trained with various Filipino masters. He is thankful to Dan Inosanto, who brought awareness of Filipino martial arts to America.

"This is a very wonderful project and I hope that we are able to change the lives of the young people who see it," he said.

Jessup hopes to put a copy of the DVD in every Oregon high school. But she has bigger plans, too. "My passion is to get this in every girl's hands and stop rape -- here, in Africa, China, everywhere," she revealed in an earlier interview.

"Jab the eye of a determined attacker to temporary disable him. I teach that and I make sure that I get people really good really fast, it doesn't matter what age you are, I can teach you how to save your lives," Von Dette said.

"I am not a big man myself, I am 5'9 and 170 lbs; I wanted to explore a more functional aspect of self-defense and I found that Filipino martial arts are exactly like that," he added.

Weapons such as knives, swords and sticks can be used in the drills that Von Dette designs for his students. "I also teach my students empty hand training. You take the weapons away and the hands still follow the smooth motions as you would have in weapons drill," he said.

There is a concept called 'defanging the snake' and it is one concept that he teaches his students. "If a snake doesn't have fangs, it can't hurt you. In the case of attackers, you can smash the hand holding the weapon and once that hand is hurt, it can no longer hold any weapon."

"I provide training drills and information that your brain would remember. My students come in and they leave with a feeling of empowerment because they learn how to defend themselves in such a short span of time," he said.

Von Dette does not have a 'Philippine connection,' so to speak, but this did not deter him from learning the various Filipino martial arts.

"There's no connection at all. It just so happened that I find Filipino martial arts amazing. My representation of the arts, my journey from studying various arts, I wanted to find something that I, or my students could use against much-taller, muscle bound guys determined to hurt you," Von Dette said.

Among the tips Von Dette shared are easy to remember. He says both eyes and ears are "vulnerable" since "it takes only 10 pounds of force and pressure to tear those ears, and that would surely get the attacker off you."

"There are hundreds of different martial art styles in the Philippines. We have eskrima, kali and arnis and each one's just a little different. I try to integrate them into a training program, depending on the individual's capacity," he said. "Notably though, practitioners of the Filipino Arts are touted for their ability to defend themselves with empty hands and weapons interchangeably regardless of their particular style."

"I hope to visit the Philippines someday so I could see more of the arts. A lot of people are not familiar with these types of arts, they are not really fancy but they are functional, and that is what's important to me. If a student has a limited time, I devise a program where the student will leave exponentially better than when they came," Von Dette added.