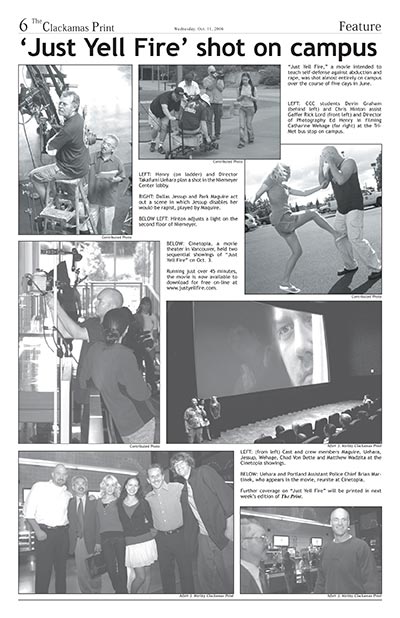 "Just Yell Fire," a movie intended to teach self-defense against abduction and rape, was shot almost entirely on campus over the course of five days in June.

Henry and Director Takafumi Uehara plan a shot in the Niemeyer Center lobby.

Dallas Jessup and Park Maguire act out a scene in which Jessup disables her would-be rapist, played by Maguire.

Hinton adjusts a light on the second floor of Niemeyer.

Running just over 45 minutes, the movie is now available to download for free on-line at www.justyellfire.com.

Uehara and Portland Assistant Police Chief Brian Martinek, who appears in the movie, reunite at Cinetopia.

Further coverage on "Just Yell Fire" will be printed in next week's edition of The Print.