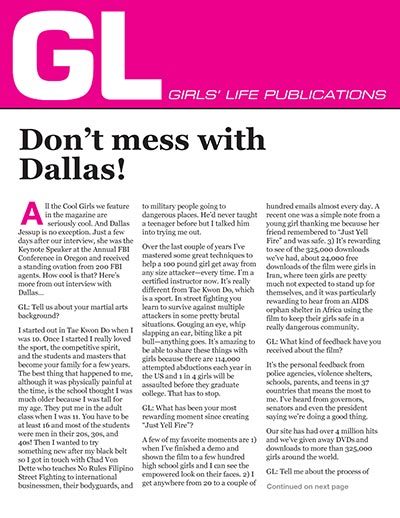 All the Cool Girls we feature in the magazine are seriously cool. And Dallas Jessup is no exception. Just a few days after our interview, she was the Keynote Speaker at the Annual FBI Conference in Oregon and received a standing ovation from 200 FBI agents. How cool is that? Here’s more from out interview with Dallas...

GL: Tell us about your martial arts background?

I started out in Tae Kwon Do when I was 10. Once I started I really loved the sport, the competitive spirit, and the students and masters that become your family for a few years. The best thing that happened to me, although it was physically painful at the time, is the school thought I was much older because I was tall for my age. They put me in the adult class when I was 11. You have to be at least 16 and most of the students were men in their 20s, 30s, and 40s! Then I wanted to try something new after my black belt so I got in touch with Chad Von Dette who teaches No Rules Filipino Street Fighting to international businessmen, their bodyguards, and to military people going to dangerous places. He’d never taught a teenager before but I talked him into trying me out.

Over the last couple of years I’ve mastered some great techniques to help a 100 pound girl get away from any size attacker—every time. I’m a certified instructor now. It’s really different from Tae Kwon Do, which is a sport. In street fighting you learn to survive against multiple attackers in some pretty brutal situations. Gouging an eye, whip slapping an ear, biting like a pit bull—anything goes. It’s amazing to be able to share these things with girls because there are 114,000 attempted abductions each year in the US and 1 in 4 girls will be assaulted before they graduate college. That has to stop.

GL: What has been your most rewarding moment since creating “Just Yell Fire”?

A few of my favorite moments are 1) when I’ve finished a demo and shown the film to a few hundred high school girls and I can see the empowered look on their faces. 2) I get anywhere from 20 to a couple of hundred emails almost every day. A recent one was a simple note from a young girl thanking me because her friend remembered to “Just Yell Fire” and was safe. 3) It’s rewarding to see of the 325,000 downloads we’ve had, about 24,000 free downloads of the film were girls in Iran, where teen girls are pretty much not expected to stand up for themselves, and it was particularly rewarding to hear from an AIDS orphan shelter in Africa using the film to keep their girls safe in a really dangerous community.

GL: What kind of feedback have you received about the film?

It’s the personal feedback from police agencies, violence shelters, schools, parents, and teens in 37 countries that means the most to me. I’ve heard from governors, senators and even the president saying we’re doing a good thing.

Our site has had over 4 million hits and we’ve given away DVDs and downloads to more than 325,000 girls around the world.

GL: Tell me about the process of actually putting the film together.

Well, first you learn that you can’t do something like this on your own and then I learned that pretty much everyone will help an important project if you just ask. For example, we asked Evangeline Lilly and Josh Holloway of Lost to do cameos. They immediately agreed and this helps girls take the film seriously.

We needed immense bandwidth for girls all around the world to be able to see the film online. One call to Integra Telecom and that was donated too. A professor volunteered to help me turn the script into a screenplay, an award winning director helped to gather a crew of 30 who volunteered to make the film, I found people and companies to donate money, equipment, props including a couple of vans, and even a college campus! After a five day insanely long hours shoot, Just Yell Fire was done except for the editing. I helped a lot with that and the number of hours it takes is unbelievable. But, last September it was ready to go.

Thank you for helping get the word out about the free film you are very likely saving some of your readers from assault or maybe much worse. It’s up to us girls to put the predators out of business.

GET GOING! So, GL gals, what are ya waiting for! Head to www.justyellfire.com to check it out for yourself. And be safe!