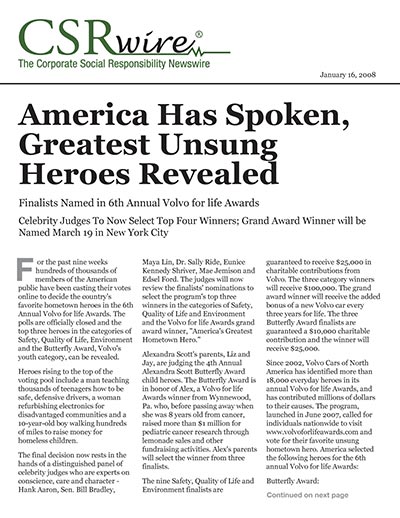 (CSRwire) IRVINE, CA. - January 16, 2008 - For the past nine weeks hundreds of thousands of members of the American public have been casting their votes online to decide the country's favorite hometown heroes in the 6th Annual Volvo for life Awards. The polls are officially closed and the top three heroes in the categories of Safety, Quality of Life, Environment and the Butterfly Award, Volvo's youth category, can be revealed.

Heroes rising to the top of the voting pool include a man teaching thousands of teenagers how to be safe, defensive drivers, a woman refurbishing electronics for disadvantaged communities and a 10-year-old boy walking hundreds of miles to raise money for homeless children.

The final decision now rests in the hands of a distinguished panel of celebrity judges who are experts on conscience, care and character - Hank Aaron, Sen. Bill Bradley, Maya Lin, Dr. Sally Ride, Eunice Kennedy Shriver, Mae Jemison and Edsel Ford. The judges will now review the finalists' nominations to select the program's top three winners in the categories of Safety, Quality of Life and Environment and the Volvo for life Awards grand award winner, "America's Greatest Hometown Hero."

Alexandra Scott's parents, Liz and Jay, are judging the 4th Annual Alexandra Scott Butterfly Award child heroes. The Butterfly Award is in honor of Alex, a Volvo for life Awards winner from Wynnewood, Pa. who, before passing away when she was 8 years old from cancer, raised more than $1 million for pediatric cancer research through lemonade sales and other fundraising activities. Alex's parents will select the winner from three finalists.

Since 2002, Volvo Cars of North America has identified more than 18,000 everyday heroes in its annual Volvo for life Awards, and has contributed millions of dollars to their causes. The program, launched in June 2007, called for individuals nationwide to visit www.volvoforlifeawards.com and vote for their favorite unsung hometown hero. America selected the following heroes for the 6th annual Volvo for life Awards:

Volvo will fly the four category winners to New York to be honored at the 42nd St. Cipriani's during the Volvo for life Awards ceremony on March 19, 2008. At the event, Volvo and program judges will present a short film documenting each winner. The ceremony will be hosted by actor Jay Sanders and will feature musical performances by various artists. Visit www.volvoforlifeawards.com to view hundreds of hero stories, including this year's finalists.