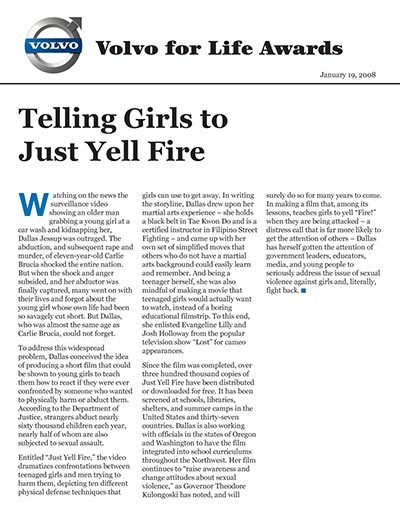 Watching on the news the surveillance video showing an older man grabbing a young girl at a car wash and kidnapping her, Dallas Jessup was outraged. The abduction, and subsequent rape and murder, of eleven-year-old Carlie Brucia shocked the entire nation. But when the shock and anger subsided, and her abductor was finally captured, many went on with their lives and forgot about the young girl whose own life had been so savagely cut short. But Dallas, who was almost the same age as Carlie Brucia, could not forget.

To address this widespread problem, Dallas conceived the idea of producing a short film that could be shown to young girls to teach them how to react if they were ever confronted by someone who wanted to physically harm or abduct them. According to the Department of Justice, strangers abduct nearly sixty thousand children each year, nearly half of whom are also subjected to sexual assault.

Entitled “Just Yell Fire,” the video dramatizes confrontations between teenaged girls and men trying to harm them, depicting ten different physical defense techniques that girls can use to get away. In writing the storyline, Dallas drew upon her martial arts experience – she holds a black belt in Tae Kwon Do and is a certified instructor in Filipino Street Fighting – and came up with her own set of simplified moves that others who do not have a martial arts background could easily learn and remember. And being a teenager herself, she was also mindful of making a movie that teenaged girls would actually want to watch, instead of a boring educational filmstrip. To this end, she enlisted Evangeline Lilly and Josh Holloway from the popular television show “Lost” for cameo appearances.

Since the film was completed, over three hundred thousand copies of Just Yell Fire have been distributed or downloaded for free. It has been screened at schools, libraries, shelters, and summer camps in the United States and thirty-seven countries. Dallas is also working with officials in the states of Oregon and Washington to have the film integrated into school curriculums throughout the Northwest. Her film continues to “raise awareness and change attitudes about sexual violence,” as Governor Theodore Kulongoski has noted, and will surely do so for many years to come. In making a film that, among its lessons, teaches girls to yell “Fire!” when they are being attacked – a distress call that is far more likely to get the attention of others – Dallas has herself gotten the attention of government leaders, educators, media, and young people to seriously address the issue of sexual violence against girls and, literally, fight back.

To learn more about Dallas Jessup and her cause, and how you can make a difference, please visit: www.justyellfire.com.