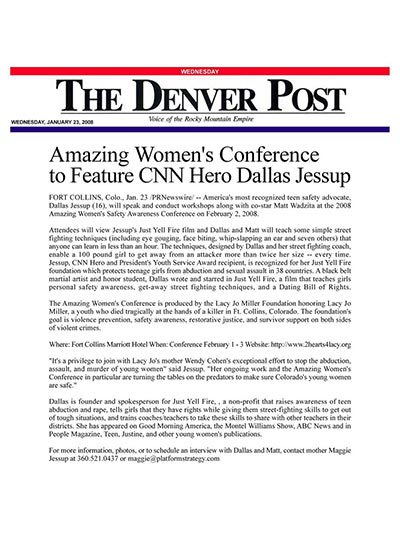 Attendees will view Jessup's Just Yell Fire film and Dallas and Matt will teach some simple street fighting techniques (including eye gouging, face biting, whip-slapping an ear and seven others) that anyone can learn in less than an hour. The techniques, designed by Dallas and her street fighting coach, enable a 100 pound girl to get away from an attacker more than twice her size -- every time. Jessup, CNN Hero and President's Youth Service Award recipient, is recognized for her Just Yell Fire foundation which protects teenage girls from abduction and sexual assault in 38 countries. A black belt martial artist and honor student, Dallas wrote and starred in Just Yell Fire, a film that teaches girls personal safety awareness, get-away street fighting techniques, and a Dating Bill of Rights.

The Amazing Women's Conference is produced by the Lacy Jo Miller Foundation honoring Lacy Jo Miller, a youth who died tragically at the hands of a killer in Ft. Collins, Colorado. The foundation's goal is violence prevention, safety awareness, restorative justice, and survivor support on both sides of violent crimes.

"It's a privilege to join with Lacy Jo's mother Wendy Cohen's exceptional effort to stop the abduction, assault, and murder of young women" said Jessup. "Her ongoing work and the Amazing Women's Conference in particular are turning the tables on the predators to make sure Colorado's young women are safe."

Dallas is founder and spokesperson for Just Yell Fire, a non-profit that raises awareness of teen abduction and rape, tells girls that they have rights while giving them street-fighting skills to get out of tough situations, and trains coaches/teachers to take these skills to share with other teachers in their districts. She has appeared on Good Morning America, the Montel Williams Show, ABC News and in People Magazine, Teen, Justine, and other young women's publications.

For more information, photos, or to schedule an interview with Dallas and Matt, contact mother Maggie Jessup at 360.521.0437 or maggie at platformstrategy.com.