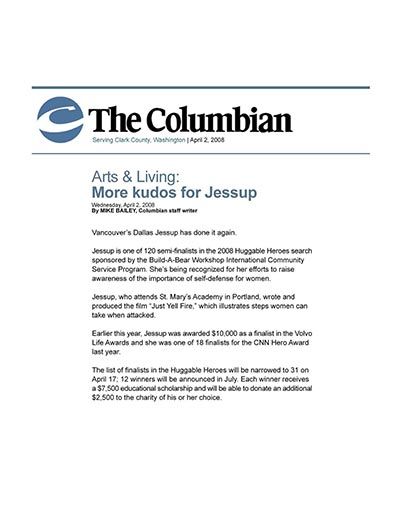 Jessup is one of 120 semi-finalists in the 2008 Huggable Heroes search sponsored by the Build-A-Bear Workshop International Community Service Program. She's being recognized for her efforts to raise awareness of the importance of self-defense for women.

Earlier this year, Jessup was awarded $10,000 as a finalist in the Volvo Life Awards and she was one of 18 finalists for the CNN Hero Award last year.

The list of finalists in the Huggable Heroes will be narrowed to 31 on
April 17; 12 winners will be announced in July. Each winner receives
a $7,500 educational scholarship and will be able to donate an additional
$2,500 to the charity of his or her choice.