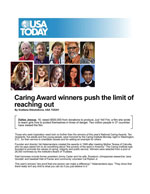 Dallas Jessup, 16, raised $500,000 from donations to produce Just Yell Fire, a film she wrote to teach girls how to protect themselves in times of danger. Two million people in 37 countries have viewed the film.

Those who seek inspiration need look no further than the winners of this year's National Caring Awards. Ten recipients, five adults and five young people, were honored by the Caring Institute Monday night in Washington, D.C., for their service to charitable causes and for setting an example for others.

Founder and director Val Halamandaris created the awards in 1989 after meeting Mother Teresa of Calcutta, who he says asked him to do something about "the poverty of the spirit in America." The Caring Institute was founded to promote the values of caring, integrity and public service. Winners were selected from a pool of 26,000 nominees by the institute's Board of Trustees.

This year's winners "are proof that one person can make a difference," Halamandaris says. "They show that there really isn't any limit to what you can do if you just believe in it."