One of the most caring women in america 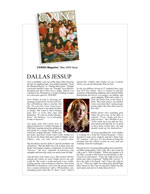 You've probably seen one of the many films showing the fair sex fighting back. You might remember "Xena the Warrior Princess" or "Thelma and Louise." Perhaps you heard Jennifer Lopez say "Enough" to an abusive husband and shove him over a ledge. Maybe you watched Uma Thurman as a sword-wielding avenger on a ferocious quest to "Kill Bill."

Now Dallas Jessup is showing the meaning of girl power in Just Yell Fire. Her self-defense video is red-hot, but the 16-year-old from Vancouver, Washington, doesn't care about royalties or ratings. She wants to show teenage girls how to resist date rape and abduction. "It's time to let the bad guys know," she declares," we're not going to take it anymore."

Too many girls don't know how to defend themselves, Dallas thought in 2004 after hearing about the abduction and death of a young Florida girl. "I could have helped that girl," Dallas told her mom, and those weren't just words. Dallas is a Tae Kwon Do black belt and certified Filipino street fighter, who can take down a grown man.

She decided to use her skills to "put the predators out of business." But she didn't try to do it alone since she thinks real change requires community involvement. "Success," she says, "depends on knowing your strengths and knowing when you need to ask for help."

And she knew just where to go. She worked with her martial arts coach on some simple moves any girl could do. She wrote a script and took it to a script-writing teacher who contacted a director. She raised $500,000 in donations. And soon the project turned into a major production with a 100-member cast, including actors from the TV show "Lost." Then it spread like wildfire after Dallas setup a website where you can download the film for free.

So far, two million viewers in 37 countries have seen Just Yell Fire online. They've looked at real-life scenarios of threatening situations and watched Dallas demonstrate her moves: eye gouges, ear pulling, and groin slapping. When she's done, it's clear she knows how to hit where it hurts. But what strikes you hardest is her conviction that "caring means giving others the force they need to feel safe."

Dallas knows she's reaching girls when she gives one of her talks at schools. "Every single girl has a relieved face," she's thrilled to see." Girls come up to me and say they feel empowered and safe. It's so good to have them realize they can and should stand up for themselves."

To keep spreading the word, Dallas is working on a Train the Trainer program. "I have decided to train more students and have them train P.E. teachers," she says. It's her dream to bring the program into the school system so every girl can someday learn her techniques.