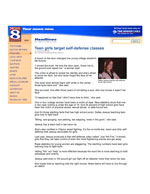 Rape statistics for young women are staggering. The startling numbers have teen girls learning how to fight back.
---
A knock on the door changed one young college student's life forever. "I turned the knob. He tore the door open, threw me to the ground and raped me," a woman said.

The victim is afraid to reveal her identity and she's afraid to show her face, but she never forgot the face of her attacker.

"His eyes were almost black with white in the center those eyes were evil," she said.

She survived. And after three years of not telling a soul, she now knows it wasn't her fault.

"It happened so fast that I didn't have time to think," she said.

One in four college women have been a victim of rape. New statistics show that one in two rape victims is under the age of 18. And 26 percent of high school girls have been the victim of physical abuse, sexual abuse, or date forced sex.

And it's those startling facts that has high school junior, Dallas Jessup teaching teen girls how to fight back.

Jessup has a black belt in tae kwon do.

She's also certified in Filipino street fighting. It's the no-holds-bar, down and dirty self-defense that Jessup advocates for girls.

Last year Jessup produced a free self-defense video called "Just Yell Fire." It shows girls that they can take control of even the most frightening events and get away.

Yelling "fire" not "help" is more effective because the word fire is more alarming to both witnesses and victims.

Jessup said even a 100 pound girl can fight off an attacker more than twice her size.

She hopes that by teaching kids the right moves, fewer teens will have to live through an attack.