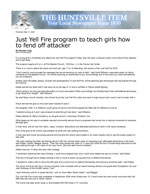 For young girls in Huntsville who attend the Just Yell Fire program Friday, they will have a chance to learn how to fend off an attacker and to get away.

There is no cost to attend the event and each girl, age 11 to 19 attending, will receive a free Just Yell Fire DVD.

"I don't want to communicate the message that we are teaching our girls to fight," said Scott Williams, associate pastor for family ministries at First Baptist Church. "It's strictly teaching an awareness of your surroundings and in the event you need self-defense, you are prepared."

Sixteen-year-old Dallas Jessup, founder and spokesperson of Just Yell Fire, will be teaching girls techniques she has learned through her training.

Dallas earned her black belt in tae kwon do by the age of 13 and is certified in Filipino street fighting.

"She's going to not only give girls information on how to be aware of their surroundings, but actually teach them self-defense techniques to get away from danger," said Williams.

Amick felt that the girls on the swim team needed to see it.

His daughter, Kelli, is in Williams' youth group at church and Amick passed the Web site for Williams to look at.

"I started looking at it and I was amazed at what this girl had done," said Williams.

What began as her way to complete required community service hours to graduate has turned into a national movement to empower teenage girls.

In their area, and all over the nation, rapes, murders, abductions and attempted abductions were in the news constantly.

One of the girls at her school was grabbed at while she was walking downtown.

A note was sent home reminding parents and the girls the school was located in an urban location and to use the buddy system to stay safe.

"We were reading the letter and talking about it with her and the news came on reporting more attempted abductions in the area," said Dallas' mother, Maggie Jessup. "Then the news played the video of 11-year-old Carlie Brucia in Florida being abducted as she was walking through a car wash on her way home. She was later found murdered."

Dallas was just 13 when she saw video footage.

"I remember watching that video thinking, I could have stopped that, and I could have helped her get out of that," said Dallas.

That line of thought led to Dallas wanting to film a movie to teach young girls how to defend themselves.

"I decided to make a film to show the 600 girls at my school how to defend themselves and everyone would be safe," said Dallas.

The home movie turned into a movie production crew complete with an award-winning director and guest stars Evangeline Lilly and Josh Holloway of the hit ABC series "Lost."

"Josh Holloway said for a cause like this, I will run down Main Street naked," said Maggie.

The Just Yell Fire movie was completed in September 2006 when Dallas was 14. It went online the next month and since then the Web site has had over 6 million visitors.

The movie has been given away or downloaded 450,000 times in 41 countries.

Last year it was the most viewed full-length feature on the Internet.

"Integra telecom donated unlimited bandwidth so that anyone in the world can donate it for free," said Maggie.

Dallas has won numerous awards, the most recent, the Caring Award given by the Caring Institute, an organization inspired by the example of Mother Teresa.

While in Washington, D.C., she was able to spend time with Bob Dole, former presidential candidate and chairman for the institute's board of trustees.

She was also voted a CNN Hero in 2007 and won the American Library Association's Most Notable Video for 2008.

Her mom said she was afraid she would let all the fame and notoriety go to her head.

"I remember sitting her down telling her that the day she turned into a Diva was the day it was over with," said Maggie.

Maggie said her daughter is very humble and she doesn't think doing this is about her.

"It's not about her, it's about saving lives," said Maggie.

Dallas travels all over the country with Just Yell Fire.

This past year she was in Washington, D.C., four times and has been to New York five times.

She has appeared on the Today Show, Good Morning America, The Montel Williams Show, local news programs around the country, radio broadcasts and in numerous publications such as People Magazine.

Dallas said she used to live in Texas when she was in kindergarten and is looking forward to coming to Huntsville Friday night.

"I'm pretty much on the run a lot, but I go to the mall with friends, we have sleepovers, we go to movies. I have a boyfriend, and I love sitting down and reading a good book," said Dallas.

With as many public appearances Dallas has had over the last two years, she says she still gets nervous before every one.

"I love doing it, and I know I can do it, but there are always these tiny little butterflies in my stomach going, "C'mon, you can't mess this up,'" said Dallas.

To relax, she listens to songs on her iPod to calm her down.

Last week she spoke to a group of 200 middle school girls and she said that age is the toughest age to get through to.

"You have to make an impact on their life and you have to do your best to make sure you get to them," said Dallas.

Dallas receives tons of e-mails everyday, thanking her for her program. One girl e-mailed Dallas saying thank you so much, if I had not watched your video, I probably wouldn't have been home tonight.

Mothers also e-mail her to thank her and write saying her daughter's life was saved because of the video.

"As teen girls, we tend to forget that we can stand up for ourselves and that we should. Making sure that no girl becomes a statistic anymore is really important to me," said Dallas.

"It's amazing what she has done," said Williams.

He has no idea how many people will show up on Friday night, but all response has been positive.

"It doesn't hurt to be prepared, that's the whole message," he said.