The 25 Most Beautiful People in the Northwest 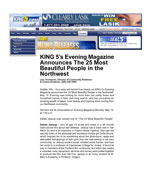 Seattle, WA – Your eyes will behold true beauty as KING 5’s Evening Magazine announces the “25 Most Beautiful People in the Northwest” May 19. Evening was looking for more than just pretty faces and household names in their year-long search, and has uncovered an amazing wealth of talent, inner beauty and inspiring drive coming from our Northwest community.

Winners will be showcased on Evening Magazine Monday, May 19, at 7:00 p.m. The “25 Most Beautiful People” include:

Dallas Jessup – who at age 14 co-wrote and acted in a 46 minute instructional film about self defense. Jessup had just received her black belt in Tae Kwon Do when she saw the security video of the abducted and murdered Florida girl Carlie Brucia. She was inspired to do something about the abductions, rapes and attempted kidnappings of teen girls that she was seeing in her own community, so Jessup wrote a script, enlisted some friends, and took her script to a professor at Clackamas College for review. It found it’s way to members of the Portland film community and within two weeks a volunteer crew, equipment, services and money were pulled together to produce the film Just Yell Fire. Jessup is an honor student at St. Mary’s Academy in Portland, Oregon.