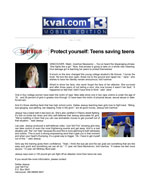 VANCOUVER, Wash. (Ivanhoe Newswire) -- You've heard the disparaging phrase, "She fights like a girl." Now, that phrase is going to take on a whole new meaning. One teenage girl is teaching her peers to protect themselves.
---
A knock on the door changed this young college student's life forever. "I turned the knob. He tore the door open, threw me to the ground and raped me," "Jane", who wishes to have her identity remain anonymous, told Ivanhoe.

Afraid to show her face, she never forgot the face of her attacker. She survived and after three years of not telling a soul, she now knows it wasn't her fault. "It happened so fast that I didn't have time to think," said "Jane".

And it's those startling facts that has high school junior, Dallas Jessup teaching teen girls how to fight back. "Biting, eye-gauging, eye jabbing, ear slapping, knee in the groin," are all good moves, Jessup told Ivanhoe.

Jessup has a black belt in tae kwon do. She's also certified in Filipino street fighting. It's this no-holds-bar down and dirty self-defense that Jessup advocates for girls. "We're instilling in them that you can use animalistic moves to get yourself out of that situation," said Jessup.

Last year, Jessup produced a free self-defense video "Just Yell Fire" showing girls they can take control of even the most frightening events and get away. And in a bad situation yell, "fire" not "help" because the word fire is more alarming to both witnesses and victims. "Fire is such a strong empowering word that it gets you in that moment and when your heart's thumping, it's a great way to trigger, 'Ok, I have to get myself out of this,'" said Jessup.

Girls say the training gives them confidence. "Yeah, I think the eye jab and the ear grab are something that are like easy and quick and something we all can do," 17 year old Sara Backstrom, told Ivanhoe. "It makes me feel more secure," 15 year old Whitney Nord said.

Jessup says even a 100 pound girl can fight off an attacker more than twice her size.