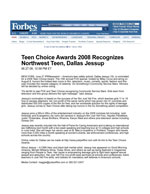 Online votes for Dallas can be made at http://www.justyellfire.com with its link to the Teen Choice Awards.