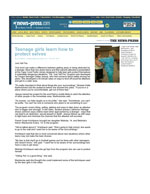 (382K)
One word can make a difference between getting away or being abducted by a stranger. More than two dozen teens and their parents attended a presentation at the Cape Coral Public Library designed to help teen girls protect themselves in potentially dangerous situations. The "Just Yell Fire" program was developed by Oregon teenager Dallas Jessup, who had concerns about safety among her peers. She developed a 30-minute video on ways to fend off would-be attackers and get to a safer area.

"It's really important to think about things like your surroundings," librarian Katie Bartholomew told the audience before she showed the video. "If you're in a place where you're uncomfortable, get out of there fast."

Jessup named her project for the word that is mostly likely to catch the attention of other people in the immediate area, Bartholomew said.

"As women, our folks taught us to be polite," she said. "Sometimes, you can't be polite. You can't be nice to someone who plans to do something to you."

The program covers biting, yelling, jabbing and ways to take down an attacker who is bigger and stronger. In the video, student actress Catherine Wehage shows common ways victims react when approached by a stranger - ways that can lead to an abduction, sexual assault or death. Jessup follows up with ways to fight back and minimize the chances that the attacker will succeed.

"We've talked about it," Krishbaum said. "She's going to high school; she wants to go to the mall and I want her to be aware of her surroundings."

Krichbaum said that she is most concerned about new situations where other teens may not make the best choices.

"My fear is that she'll go to football games and be there with other teenagers she doesn't know," she said. "I want her to be aware of her surroundings and have a way to get away."

Melinda Krichbaum said she got tips from the program she can use to protect herself.

Mackenzie said she thought she could implement some of the techniques used by the teen girls in the video.

"Jabbing the eye is good," she said.