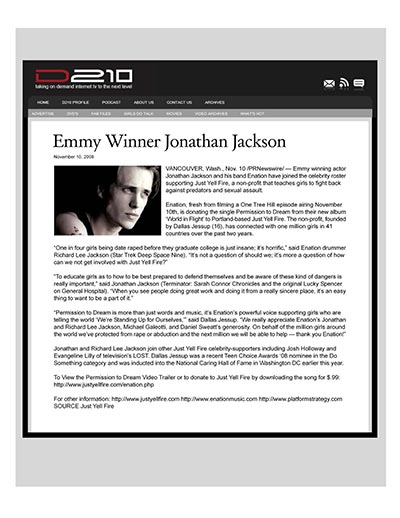 Enation, fresh from filming a One Tree Hill episode airing November 10th, is donating the single Permission to Dream from their new album ‘World in Flight’ to Portland-based Just Yell Fire. The non-profit, founded by Dallas Jessup (16), has connected with one million girls in 41 countries over the past two years.

“One in four girls being date raped before they graduate college is just insane; it’s horrific,” said Enation drummer Richard Lee Jackson (Star Trek Deep Space Nine). “It’s not a question of should we; it’s more a question of how can we not get involved with Just Yell Fire?”

“To educate girls as to how to be best prepared to defend themselves and be aware of these kind of dangers is really important,” said Jonathan Jackson (Terminator: Sarah Connor Chronicles and the original Lucky Spencer on General Hospital). “When you see people doing great work and doing it from a really sincere place, it’s an easy thing to want to be a part of it.”

“Permission to Dream is more than just words and music, it’s Enation’s powerful voice supporting girls who are telling the world ‘We’re Standing Up for Ourselves,’” said Dallas Jessup. “We really appreciate Enation’s Jonathan and Richard Lee Jackson, Michael Galeotti, and Daniel Sweatt’s generosity. On behalf of the million girls around the world we’ve protected from rape or abduction and the next million we will be able to help – thank you Enation!”

Jonathan and Richard Lee Jackson join other Just Yell Fire celebrity-supporters including Josh Holloway and Evangeline Lilly of television’s LOST. Dallas Jessup was a recent Teen Choice Awards ‘08 nominee in the Do Something category and was inducted into the National Caring Hall of Fame in Washington DC earlier this year.

To View the Permission to Dream Video Trailer or to donate to Just Yell Fire by downloading the song for $.99: http://www.justyellfire.com/enation.php