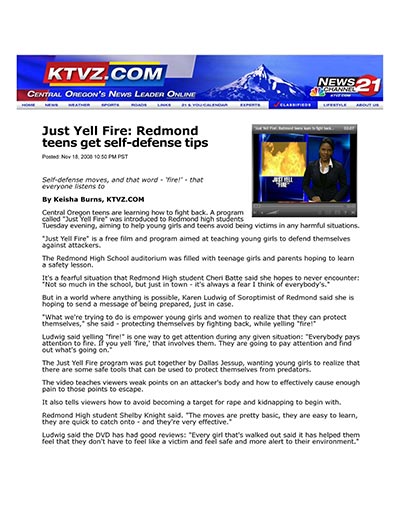 Self-defense moves, and that word - 'fire!' - that everyone listens to

Central Oregon teens are learning how to fight back. A program called "Just Yell Fire" was introduced to Redmond high students Tuesday evening, aiming to help young girls and teens avoid being victims in any harmful situations.

"Just Yell Fire" is a free film and program aimed at teaching young girls to defend themselves against attackers.

The Redmond High School auditorium was filled with teenage girls and parents hoping to learn a safety lesson.

It's a fearful situation that Redmond High student Cheri Batte said she hopes to never encounter: "Not so much in the school, but just in town - it's always a fear I think of everybody's."

But in a world where anything is possible, Karen Ludwig of Soroptimist of Redmond said she is hoping to send a message of being prepared, just in case.

"What we're trying to do is empower young girls and women to realize that they can protect themselves," she said - protecting themselves by fighting back, while yelling "fire!"

Ludwig said yelling "fire!" is one way to get attention during any given situation: "Everybody pays attention to fire. If you yell 'fire,' that involves them. They are going to pay attention and find out what's going on."

The Just Yell Fire program was put together by two teenagers, wanting young girls to realize that there are some safe tools that can be used to protect themselves from predators.

The video teaches viewers weak points on an attacker's body and how to effectively cause enough pain to those points to escape.

It also tells viewers how to avoid becoming a target for rape and kidnapping to begin with.

Redmond High student Shelby Knight said. "The moves are pretty basic, they are easy to learn, they are quick to catch onto - and they're very effective."

Ludwig said the DVD has had good reviews: "Every girl that's walked out said it has helped them feel that they don't have to feel like a victim and feel safe and more alert to their environment."

For more information on Just Yell Fire, or on how you can obtain a copy of the free DVD, log onto http://www.justyellfire.com.