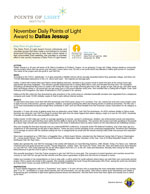 Dallas Jessup is a 16 year old senior at St. Mary's Academy in Portland, Oregon. As an amazing 13 year old, Dallas Jessup started a community service project which she has grown over the past 3 years (she's now 16) into a non-profit which has affected a million girls across 41 countries. The name of her project and non-profit is Just Yell Fire.

According to the YWCA, statistically 1 in 4 girls presently in Middle School will be sexually assaulted before they graduate college; and there are 114,000 attempted abductions in the U.S. alone each year – the majority are teenage girls.

Dallas, a black belt martial artist and Filipino street fighting instructor, decided to do a home movie to teach the girls at her school some age appropriate get-away strategies. That decision quickly blossomed into to raising $600,000 in cash and donated services plus 130 volunteers (including a professional film crew) to create a 46 minute film (from her script) showing girls how to bite, gouge an eye, tear an ear, and other quick learn techniques where a 100 pound girl can get away from a 250 pound attacker every time. She included also a Dating Bill of Rights. Even Josh Holloway and Evangeline Lilly (stars of television's LOST) jumped in for cameos.

Dallas put the film online for free download by girls anywhere in the world using an unlimited bandwidth donation she negotiated from a telephone company and made 10,000 (initially) copies to mail to girls without Internet access.

To date there have been more than 650,000 downloads and DVDs given away in 41 countries. Five, ten, twenty five and even more emails come in daily from law enforcement, parents, teachers, shelters, and teens praising the effort and sharing stories of violence-prevented. The film was 1 of 10 most downloaded production-length films worldwide in 2007 and won Most Notable from the American Library Association for its category in 2008.

Recently a 13 year old wrote of getting away from an abduction using Dallas' Just Yell Fire techniques. An AIDS orphans shelter in Africa wrote that they are using the Just Yell Fire movie to protect their girls from an urban legend that claims raping a virgin is a cure for HIV-AIDS. Hundreds of emails are posted on the www.justyellfire.com site.

Dallas travels 10,000 miles per month on average speaking at schools, women's conferences, shelters, law enforcement events and elsewhere getting the word out to girls that they have rights and the ability to stand up for themselves. This summer she toured rural India speaking to thousands at a dozen high schools and universities in response to the crisis of abductions there by slave traders for the international sex trafficking industry.

She was recently the first teen keynote ever at a national MENSA conference, a keynote at the FBI National Academy, and a few days ago at a conference of 350 extremely at-risk girls in New Mexico. These are just a recent sampling of her continuing engagements. Somehow she maintains a 3.5 average at school with her teachers letting her turn in assignments by email and her friends sharing notes while she pursues this important initiative.

She's been recognized as a CNN Hero, a Huggable Hero, a Brick Award Winner, inducted into the National Caring Hall of Fame in Washington DC, Caring Award Winner, Teen Choice Award Nominee '08, Washington State Volunteer of the Year, One of 25 Most Beautiful People in the Northwest, Elle Girl Teen Hero™

Dallas also spreads the Just Yell Fire message in the media with features on Good Morning America, CNN, Montel, Today, Fox News Live, Hallmark Channel and local spots around the country. People Magazine, Justine, Teen, Tae Kwon Do Times, Girls Life, Teen and others have done features on Just Yell Fire. USA Today featured her as did other papers from the U.S. to the UK, India and elsewhere. Monday she's doing her first video teleconference to get the word to girls in Pakistan.

She recently launched a Train the Trainer program to get Just Yell Fire to more girls. The concept is to teach teachers and coaches around the country so Just Yell Fire can get into the schools and thus save a generation of girls from the horrors of assault or worse.

Dallas now includes in her presentations on how to stay safe, a call to action for youth activism where teens can start their own community service project. She's a great role model in this capacity. She recently completed her book Young Revolutionaries Who Rock, saving the world one revolution at a time which comes out early 2009 from Continental Shelf Publishing.

In Touch Weekly Magazine calls her a "Superteen" and I agree. A 16 year old hero who is protecting the most vulnerable members of our society, girls 11 to 19 – worldwide in a crisis where parents can't be everywhere, nor can the police. Girls have to stand up for themselves and Dallas is empowering girls worldwide to fight back against physical abuse and abduction. She lets them know they have rights and exactly how to stand up for them.