Look What She Did 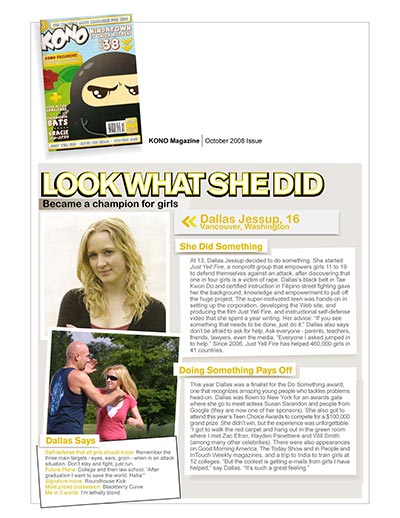 (592K)
Became a champion for girls

She Did Something
At 13, Dallas Jessup decided to do something. She started Just Yell Fire, a nonprofit group that empowers girls 11 to 19 to defend themselves against an attack, after discovering that one in four girls is a victim of rape. Dallas's black belt in Tae Kwon Do and certified instruction in Filipino street fighting gave her the background, knowledge and empowerment to pull off the huge project. The super-motivated teen was hands-on in setting up the corporation, developing the Web site, and producing the film Just Yell Fire, and instructional self-defense video that she spent a year writing. Her advice: "If you see something that needs to be done, just do it." Dallas also says don't be afraid to ask for help. Ask everyone - parents, teachers, friends, lawyers, even the media. "Everyone I asked jumped in to help." Since 2006, Just Yell Fire has helped 460,000 girls in 41 countries.

Doing Something Pays Off
This year Dallas was a finalist for the Do Something award, one that recognizes amazing young people who tackles problems head-on. Dallas was flown to New York for an awards gala where she go to meet actess Susan Sarandon and people from
Google (they are now one of her sponsors). She also got to attend this year's Teen Choice Awards to compete for a $100,000 grand prize. She didn't win, but the experience was unforgettable. "I got to walk the red carpet and hang out in the green room where I met Zac Efron, Hayden Panettiere and Will Smith (among many other celebrities). There were also appearances on Good Morning America, The Today Show and in People and InTouch Weekly magazines, and a trip to India to train girls at 12 colleges. "But the coolest is getting e-mails from girls I have helped," say Dallas. "It's such a great feeling."

Dallas Says
Self-defense that all girls should know: Remember the three main targets - eyes, ears, groin - when in an attack situation. Don't stay and fight, just run.
Future Plans: College and then law school. "After graduation I want to save the world. Haha!"
Signature move: Roundhouse Kick
Most prized possession: Blackberry Curve
Me in 3 words: I'm lethally blond