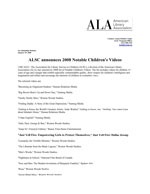 CHICAGO - The Association for Library Service to Children (ALSC), a division of the American Library Association (ALA), has selected its 2008 list of Notable Children's Videos. The list includes videos for children 14 years of age and younger that exhibit especially commendable quality, show respect for children's intelligence and imagination and reflect and encourage the interests of children in exemplary ways.

The selected videos are:

"Big Brown Bear's Up and Down Day," Nutmeg Media.

"Finding Daddy: A Story of the Great Depression," Nutmeg Media.

"Getting to Know the World's Greatest Artists: Andy Warhol," Getting to Know, Inc. "Huffing: The Latest Facts about Inhalant Abuse," Human Relations Media.

"The Librarian from the Black Lagoon," Weston Woods Studios.

"Nightmare at School," National Film Board of Canada.