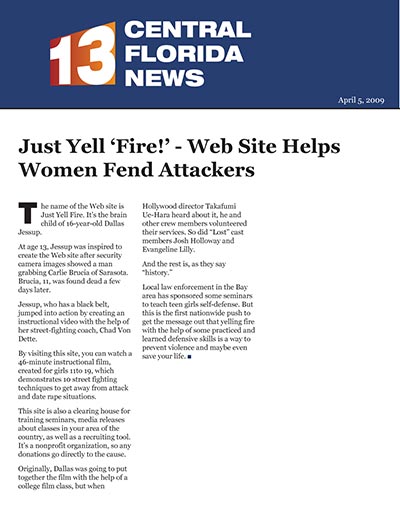 The name of the Web site is Just Yell Fire. It’s the brain child of 16-year-old Dallas Jessup.

At age 13, Jessup was inspired to create the Web site after security camera images showed a man grabbing Carlie Brucia of Sarasota. Brucia, 11, was found dead a few days later.

Jessup, who has a black belt, jumped into action by creating an instructional video with the help of her street-fighting coach, Chad Von Dette.

By visiting this site, you can watch a 46-minute instructional film, created for girls 11to 19, which demonstrates 10 street fighting techniques to get away from attack and date rape situations.

This site is also a clearing house for training seminars, media releases about classes in your area of the country, as well as a recruiting tool. It’s a nonprofit organization, so any donations go directly to the cause.

Originally, Dallas was going to put together the film with the help of a college film class, but when Hollywood director Takafumi Ue-Hara heard about it, he and other crew members volunteered their services. So did “Lost” cast members Josh Holloway and Evangeline Lilly.

And the rest is, as they say “history.”

Local law enforcement in the Bay area has sponsored some seminars to teach teen girls self-defense. But this is the first nationwide push to get the message out that yelling fire with the help of some practiced and learned defensive skills is a way to prevent violence and maybe even save your life.