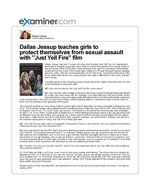 Dallas Jessup was just 13 years old when she founded Just Yell Fire, an organization dedicated to helping young girls learn skills to protect themselves from sexual violence. She produced a film of the same name that has been seen by hundreds of thousands of girls all over the world. Three years later, Dallas is a 16 year old youth activist, speaker, and now writer, with the recent publication of her first book, Young Revolutionaries Who Rock, which talks about how young people can make a difference in the world, just like she is doing.

I recently  spoke to this amazing young woman about the origins of the film and how she works tirelessly to keep girls safe.

SC: How did the idea for the Just Yell Fire film come about?

DJ: I saw security video footage on the news showing a young Florida girl being approached by a man; she went away with him willingly. Four days later she was found dead. At the same time there were some high profile abductions here in Portland with similar outcomes. I had a black belt in Tae Kwon Do and some Filipino Street Fighting skills so I decided to make a home video to show my schoolmates some get-away techniques.
The word got out that we were doing a film to protect girls and 60 days later we had a volunteer professional crew of 30, 100 volunteer extras, sets, equipment and everything else to make the Just Yell Fire film. Josh Holloway and Evangeline Lilly (From TV's LOST) even did cameos. The result is a 46 minute film showing stay safe strategies for girls 11 to 19 (or older), a Dating Bill of Rights and 10 street fighting techniques where a girl can get away from an attacker twice her size (biting, eye gouging, etc.) Since Sept of 2006 it has been downloaded (it's free online) more than 1 million times, and we've heard from girls, parents, teachers, law enforcement, shelters and others in 44 countries saying they're using Just Yell Fire to keep girls safe.

SC: Just Yell Fire has been seen by hundreds of thousands of girls in 44 countries. How can parents and teachers make sure all girls view this important film?

DJ: Every girl should see this film; that's why we're teaching coaches and teachers around the country how to teach Just Yell Fire. The program launched at M.I.T in February! What's great is any girl anywhere can see the film for free online at www.justyellfire.com. In one hour a girl will learn that she has rights and how to stand up for them; and if she's in a tough situation, how to get out of there - every time. Schools invite us in to put on programs, and I've been traveling about 10,000 miles a month to help; last summer I put on programs at 12 colleges in rural India because there's such a problem with abduction for the sex trafficking industry there.

SC: For girls who have not yet seen the film, what is the most important advice you can offer them about fighting off a potential attacker?

DJ: Don't stay and fight; you'll lose, even if you've had some martial arts training. The whole idea is to disable an attacker for just 3 or 4 seconds so you can run. Anyone can bite; anyone can gouge someone in the eye. Did you know it takes only 7 to 10 pounds of pressure to rip an ear off? Everyone should also yell "Fire" because most bad guys who pick on girls absolutely don't want attention; yelling "Fire" brings attention to the situation and some kids have gotten away just doing this.

Please check out this important film, and spread the word to every girl and young women you know.  You may be saving a life!

Also be sure to check out Dallas' new book, Young Revolutionaries Who Rock, for other inspiring stories about young people working to make a difference.