One Small Voice That Packs a Powerful Punch 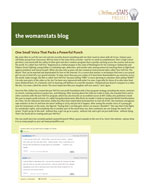 My sister likes to surf the net a lot and she recently shared something with me that I want to share with all of you. Sixteen-year-old Dallas Jessup from Vancouver, WA has been in the news fairly recently – and for no small accomplishment. She’s a high school girl who’s concerned with the safety of other girls and she’s created a program that is quickly catching across the country and across the world. It’s called “Just Yell Fire.” Registered as a lethal weapon in the state of Washington for her training in Taekwondo and Filipino Street Fighting, young Dallas is combating rape, abduction, and murder rates among women by teaching them to fight back against predators and sexual assault. When she was only 14 years old she created an instructional video called “Just Yell Fire: The Movie” that can be watched and downloaded for free on the internet. It’s a course that teaches 10 techniques that even a 100-pound girl can use to fend off a 250-pound attacker. To date, more than 950,000 copies of it have been downloaded in 44 countries across the world. Sadly enough, the film is called “Just Yell Fire” because yelling “FIRE!” is more alarming to onlookers than yelling “RAPE!” I’ve only seen parts of the video so far, but I’ve been very impressed with what I’ve seen. Especially for those of us who have lived more sheltered lives, it’s a fantastic start to learning self-defense in a real-life situation – Hollywood just doesn’t compare to a video like this. Fox news called the movie “the most important film your daughter will ever watch,” and I agree.

Since her film, Dallas has created the Just Yell Fire non-profit foundation with a four-program strategy, including the movie, seminars at schools, training teachers/coaches/etc, and lobbying. After hearing about the child sex trade in India, she traveled there and to other countries with the Just Yell Fire program, which has also become an accredited course at MIT. Dallas also published a book this year to inspire youth activism. It’s called Young Revolutionaries Who Rock: An Insider’s Guide to Saving the World One Revolution at a Time. On her television interviews, Dallas has often been asked what motivated her to start all of this. She mentions outrageous rape statistics in the US and how she wasn’t willing to sit by and just let it happen. After seeing the murder story of a young girl near her hometown on the news, she figured, “Seeing that I can help girls, there’s no reason I shouldn’t.” She says that if she fights for somebody’s rights, and somebody else in another part of the world does too, then combined, we can change the world. Her vision: "A girl can go to the mall - without fear, a girl can go to a party - without risk; and a girl can just walk home - without dying. That's the world we're creating with Just Yell Fire."

Her one small voice has certainly packed a powerful punch! What a great example to the rest of us. Here’s the website – please show it to as many people as you can!