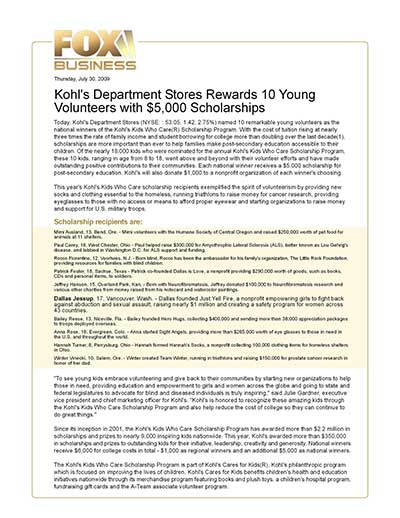 (780K)
Today, Kohl's Department Stores named 10 remarkable young volunteers as the national winners of the Kohl's Kids Who Care(R) Scholarship Program. With the cost of tuition rising at nearly three times the rate of family income and student borrowing for college more than doubling over the last decade(1), scholarships are more important than ever to help families make post-secondary education accessible to their children. Of the nearly 18,000 kids who were nominated for the annual Kohl's Kids Who Care Scholarship Program, these 10 kids, ranging in age from 8 to 18, went above and beyond with their volunteer efforts and have made outstanding positive contributions to their communities. Each national winner receives a $5,000 scholarship for post-secondary education. Kohl's will also donate $1,000 to a nonprofit organization of each winner's choosing.

This year's Kohl's Kids Who Care scholarship recipients exemplified the spirit of volunteerism by providing new socks and clothing essential to the homeless, running triathlons to raise money for cancer research, providing eyeglasses to those with no access or means to afford proper eyewear and starting organizations to raise money and support for U.S. military troops.

-- Mimi Ausland, 13, Bend, Ore. - Mimi volunteers with the Humane Society of Central Oregon and raised $250,000 worth of pet food for animals at 11 shelters.

-- Rocco Fiorentino, 12, Voorhees, N.J. - Born blind, Rocco has been the ambassador for his family's organization, The Little Rock Foundation, providing resources for families with blind children.

-- Patrick Foster, 18, Sachse, Texas - Patrick co-founded Dallas is Love, a nonprofit providing $290,000 worth of goods, such as books, CDs and personal items, to soldiers.

-- Jeffrey Hanson, 15, Overland Park, Kan. - Born with Neurofibromatosis, Jeffrey donated $100,000 to Neurofibromatosis research and various other charities from money raised from his notecard and watercolor paintings.

-- Anna Rose, 18, Evergreen, Colo. - Anna started Sight Angels, providing more than $265,000 worth of eye glasses to those in need in the U.S. and throughout the world.

"To see young kids embrace volunteering and give back to their communities by starting new organizations to help those in need, providing education and empowerment to girls and women across the globe and going to state and federal legislatures to advocate for blind and diseased individuals is truly inspiring," said Julie Gardner, executive vice president and chief marketing officer for Kohl's. "Kohl's is honored to recognize these amazing kids through the Kohl's Kids Who Care Scholarship Program and also help reduce the cost of college so they can continue to do great things."

Since its inception in 2001, the Kohl's Kids Who Care Scholarship Program has awarded more than $2.2 million in scholarships and prizes to nearly 9,000 inspiring kids nationwide. This year, Kohl's awarded more than $350,000 in scholarships and prizes to outstanding kids for their initiative, leadership, creativity and generosity. National winners receive $6,000 for college costs in total - $1,000 as regional winners and an additional $5,000 as national winners.

The Kohl's Kids Who Care Scholarship Program is part of Kohl's Cares for Kids(R), Kohl's philanthropic program which is focused on improving the lives of children. Kohl's Cares for Kids benefits children's health and education initiatives nationwide through its merchandise program featuring books and plush toys, a children's hospital program, fundraising gift cards and the A-Team associate volunteer program.