How to React to Exhibitionists and Indecent Exposure 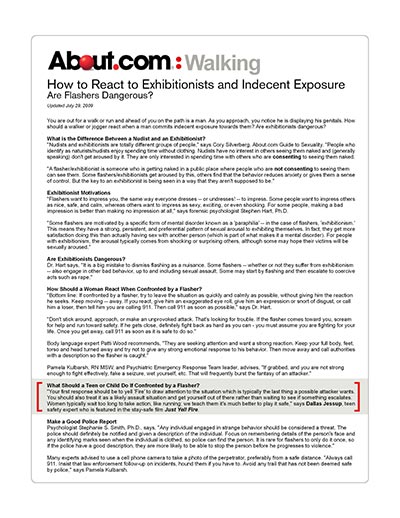 You are out for a walk or run and ahead of you on the path is a man. As you approach, you notice he is displaying his genitals. How should a walker or jogger react when a man commits indecent exposure towards them? Are exhibitionists dangerous?

What is the Difference Between a Nudist and an Exhibitionist?

"Nudists and exhibitionists are totally different groups of people," says Cory Silverberg, About.com Guide to Sexuality. "People who identify as naturists/nudists enjoy spending time without clothing. Nudists have no interest in others seeing them naked and (generally speaking) don't get aroused by it. They are only interested in spending time with others who are consenting to seeing them naked.

"A flasher/exhibitionist is someone who is getting naked in a public place where people who are not consenting to seeing them can see them. Some flashers/exhibitionists get aroused by this, others find that the behavior reduces anxiety or gives them a sense of control. But the key to an exhibitionist is being seen in a way that they aren't supposed to be."

"Some flashers are motivated by a specific form of mental disorder known as a 'paraphilia' -- in the case of flashers, 'exhibitionism.' This means they have a strong, persistent, and preferential pattern of sexual arousal to exhibiting themselves. In fact, they get more satisfaction doing this than actually having sex with another person (which is part of what makes it a mental disorder). For people with exhibitionism, the arousal typically comes from shocking or surprising others, although some may hope their victims will be sexually aroused."

Dr. Hart says, "It is a big mistake to dismiss flashing as a nuisance. Some flashers -- whether or not they suffer from exhibitionism -- also engage in other bad behavior, up to and including sexual assault. Some may start by flashing and then escalate to coercive acts such as rape."

How Should a Woman React When Confronted by a Flasher?

"Bottom line: If confronted by a flasher, try to leave the situation as quickly and calmly as possible, without giving him the reaction he seeks. Keep moving -- away. If you react, give him an exaggerated eye roll, give him an expression or snort of disgust, or call him a loser, then tell him you are calling 911. Then call 911 as soon as possible," says Dr. Hart.

"Don't stick around, approach, or make an unprovoked attack. That's looking for trouble. If the flasher comes toward you, scream for help and run toward safety. If he gets close, definitely fight back as hard as you can - you must assume you are fighting for your life. Once you get away, call 911 as soon as it is safe to do so."

Body language expert Patti Wood recommends, "They are seeking attention and want a strong reaction. Keep you full body, feet, torso and head turned away and try not to give any strong emotional response to his behavior. Then move away and call authorities with a description so the flasher is caught."

Pamela Kulbarsh, RN MSW, and Psychiatric Emergency Response Team leader, advises, "If grabbed, and you are not strong enough to fight effectively, fake a seizure, wet yourself, etc. That will frequently burst the fantasy of an attacker."

What Should a Teen or Child Do If Confronted by a Flasher?

"Your first response should be to yell 'Fire' to draw attention to the situation which is typically the last thing a possible attacker wants. You should also treat it as a likely assault situation and get yourself out of there rather than waiting to see if something escalates. Women typically wait too long to take action, like running; we teach them it's much better to play it safe," says Dallas Jessup, teen safety expert who is featured in the stay-safe film Just Yell Fire.

Psychologist Stephanie S. Smith, Ph.D., says, "Any individual engaged in strange behavior should be considered a threat. The police should definitely be notified and given a description of the individual. Focus on remembering details of the person's face and any identifying marks seen when the individual is clothed, so police can find the person. It is rare for flashers to only do it once, so if the police have a good description, they are more likely to be able to stop the person before he progresses to violence."

Many experts advised to use a cell phone camera to take a photo of the perpetrator, preferably from a safe distance. "Always call 911. Insist that law enforcement follow-up on incidents, hound them if you have to. Avoid any trail that has not been deemed safe by police," says Pamela Kulbarsh.