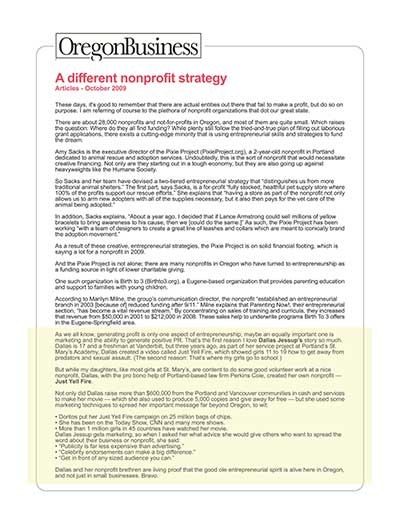 These days, it's good to remember that there are actual entities out there that fail to make a profit, but do so on purpose. I am referring of course to the plethora of nonprofit organizations that dot our great state.

There are about 28,000 nonprofits and not-for-profits in Oregon, and most of them are quite small. Which raises the question: Where do they all find funding? While plenty still follow the tried-and-true plan of filling out laborious grant applications, there exists a cutting-edge minority that is using entrepreneurial skills and strategies to fund the dream.

Amy Sacks is the executive director of the Pixie Project (PixieProject.org), a 2-year-old nonprofit in Portland dedicated to animal rescue and adoption services. Undoubtedly, this is the sort of nonprofit that would necessitate creative financing. Not only are they starting out in a tough economy, but they are also going up against heavyweights like the Humane Society.

So Sacks and her team have devised a two-tiered entrepreneurial strategy that "distinguishes us from more traditional animal shelters." The first part, says Sacks, is a for-profit "fully stocked, healthful pet supply store where 100% of the profits support our rescue efforts." She explains that "having a store as part of the nonprofit not only allows us to arm new adopters with all of the supplies necessary, but it also then pays for the vet care of the animal being adopted."

In addition, Sacks explains, "About a year ago, I decided that if Lance Armstrong could sell millions of yellow bracelets to bring awareness to his cause, then we [could do the same.]" As such, the Pixie Project has been working "with a team of designers to create a great line of leashes and collars which are meant to iconically brand the adoption movement."

As a result of these creative, entrepreneurial strategies, the Pixie Project is on solid financial footing, which is saying a lot for a nonprofit in 2009.

And the Pixie Project is not alone; there are many nonprofits in Oregon who have turned to entrepreneurship as a funding source in light of lower charitable giving.

One such organization is Birth to 3 (Birtht03.org), a Eugene-based organization that provides parenting education and support to families with young children.

According to Marilyn Milne, the group's communication director, the nonprofit "established an entrepreneurial branch in 2003 [because of] reduced funding after 9/11." Milne explains that Parenting Now!, their entrepreneurial section, "has become a vital revenue stream." By concentrating on sales of training and curricula, they increased that revenue from $50,000 in 2001 to $212,000 in 2008. These sales help to underwrite programs Birth To 3 offers in the Eugene-Springfield area.

As we all know, generating profit is only one aspect of entrepreneurship; maybe an equally important one is marketing and the ability to generate positive PRo That's the first reason I love Dallas Jessup's story so much. Dallas is 17 and a freshman at Vanderbilt, but three years ago, as part of her service project at Portland's St. Mary's Academy, Dallas created a video called Just Yell Fire, which showed girls 11 to 19 how to get away from predators and sexual assault. (The second reason: That's where my girls go to school.)

But while my daughters, like most girls at St. Mary's, are content to do some good volunteer work at a nice nonprofit, Dallas, with the pro bono help of Portland-based law firm Perkins Coie, created her own nonprofit Just Yell Fire.

Not only did Dallas raise more than $600,000 from the Portland and Vancouver communities in cash and services to make her movie - which she also used to produce 5,000 copies and give away for free - but she used some marketing techniques to spread her important message far beyond Oregon, to wit:

Dallas Jessup gets marketing, so when I asked her what advice she would give others who want to spread the word about their business or nonprofit, she said:

Dallas and her nonprofit brethren are living proof that the good ole entrepreneurial spirit is alive here in Oregon, and not just in small businesses. Bravo.