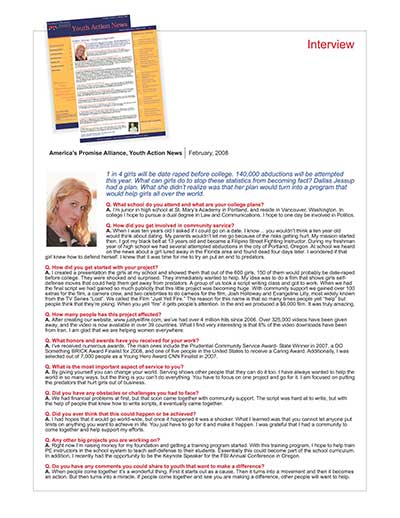 1 in 4 girls will be date raped before college. 140,000 abductions will be attempted
this year. What can girls do to stop these statistics from becoming fact? Dallas Jessup
had a plan. What she didn't realize was that her plan would turn into a program that
would help girls all over the world.

Q. What school do you attend and what are your college plans?
A. I'm junior in high school at St. Mary's Academy in Portland, and reside in Vancouver, Washington. In
college I hope to pursue a dual degree in Law and Communications. I hope to one day be involved in Politics.

Q. How did you get involved in community service?
A. When I was ten years old I asked if I could go on a date. I know... you wouldn't think a ten year old
would think about dating. My parents wouldn't let me go because of the risks getting hurt. My mission started
then. I got my black belt at 13 years old and became a Filipino Street Fighting Instructor. During my freshman
year of high school we had several attempted abductions in the city of Portland, Oregon. At school we heard
on the news about a girl lured away in the Florida area and found dead four days later. I wondered if that
girl knew how to defend herself. I knew that it was time for me to try an put an end to predators.

Q. How did you get started with your project?
A. I created a presentation the girls at my school and showed them that out of the 600 girls, 150 of them would probably be date-raped
before college. They were shocked and surprised. They immediately wanted to help. My idea was to do a film that shows girls selfdefense
moves that could help them get away from predators. A group of us took a script writing class and got to work. When we had
the final script we had gained so much publicity that this little project was becoming huge. With community support we gained over 100
extras for the film, a camera crew, and two celebrities to do cameos for the film, Josh Holloway and Evangeline Lilly, most widely known
from the TV Series "Lost". We called the Film "Just Yell Fire." The reason for this name is that so many times people yell "help" but
people think that they're joking. When you yell "fire" it gets people's attention. In the end we produced a $6,000 film. It was truly amazing.

Q. How many people has this project affected?
A. After creating our website, www.justyellfire.com. we've had over 4 million hits since 2006. Over 325,000 videos have been given
away, and the video is now available in over 39 countries. What I find very interesting is that 8% of the video downloads have been
from Iran. I am glad that we are helping women everywhere.

Q. What honors and awards have you received for your work?
A. I've received numerous awards. The main ones include the Prudential Community Service Award- State Winner in 2007, a DO
Something BRICK Award Finalist for 2008, and one of five people in the United States to receive a Caring Award. Additionally, I was
selected out of 7,000 people as a Young Hero Award CNN Finalist in 2007.

Q. What is the most important aspect of service to you?
A. By giving yourself you can change your world. Serving shows other people that they can do it too. I have always wanted to help the
world in so many ways, but the thing is you can't do everything. You have to focus on one project and go for it. I am focused on putting
the predators that hurt girls out of business.

Q. Did you have any obstacles or challenges you had to face?
A. We had financial problems at first, but that soon came together with community support. The script was hard at to write, but with
the help of people that knew how to write scripts, it eventually came together.

Q. Did you ever think that this could happen or be achieved?
A. I had hopes that it would go world-wide, but once it happened it was a shocker. What I learned was that you cannot let anyone put
limits on anything you want to achieve in life. You just have to go for it and make it happen. I was grateful that I had a community to
come together and help support my efforts.

Q. Any other big projects you are working on?
A. Right now I'm raising money for my foundation and getting a training program started. With this training program, I hope to help train
PE instructors in the school system to teach self-defense to their students. Essentially this could become part of the school curriculum.
In addition, I recently had the opportunity to be the Keynote Speaker for the FBI Annual Conference in Oregon.

Q. Do you have any comments you could share to youth that want to make a difference?
A. When people come together it's a wonderful thing. First it starts out as a cause. Then it turns into a movement and then it becomes
an action. But then turns into a miracle. If people come together and see you are making a difference, other people will want to help.