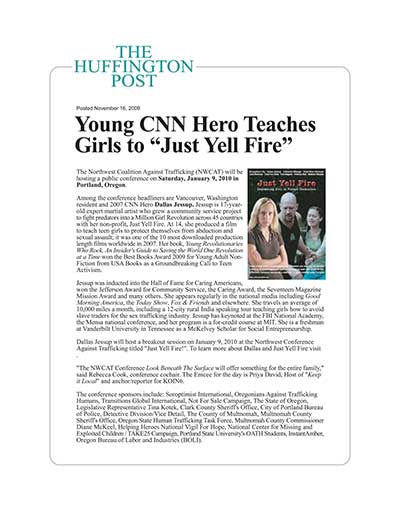 The Northwest Coalition Against Trafficking (NWCAT) will be hosting a public conference on Saturday, January 9, 2010 in Portland, Oregon.

Among the conference headliners are Vancouver, Washington resident and 2007 CNN Hero Dallas Jessup. Jessup is 17-year-old expert martial artist who grew a community service project to fight predators into a Million Girl Revolution across 45 countries with her non-profit, Just Yell Fire. At 14, she produced a film to teach teen girls to protect themselves from abduction and sexual assault; it was one of the 10 most downloaded production length films worldwide in 2007. Her book, Young Revolutionaries Who Rock, An Insider's Guide to Saving the World One Revolution at a Time won the Best Books Award 2009 for Young Adult Non-Fiction from USA Books as a Groundbreaking Call to Teen Activism.

Jessup was inducted into the Hall of Fame for Caring Americans, won the Jefferson Award for Community Service, the Caring Award, the Seventeen Magazine Mission Award and many others. She appears regularly in the national media including Good Morning America, the Today Show, Fox & Friends and elsewhere. She travels an average of 10,000 miles a month, including a 12-city rural India speaking tour teaching girls how to avoid slave traders for the sex trafficking industry. Jessup has keynoted at the FBI National Academy, the Mensa national conference, and her program is a for-credit course at MIT. She is a freshman at Vanderbilt University in Tennessee as a McKelvey Scholar for Social Entrepreneurship.

Dallas Jessup will host a breakout session on January 9, 2010 at the Northwest Conference Against Trafficking titled "Just Yell Fire!". To learn more about Dallas and Just Yell Fire visit www.dallasjessup.com.

"The NWCAT Conference Look Beneath The Surface will offer something for the entire family," said Rebecca Cook, conference cochair. The Emcee for the day is Priya David, Host of "Keep it Local" and anchor/reporter for KOIN6.