Jackson's GH return came "out of the blue" 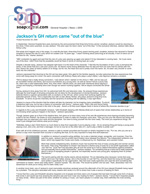 In September, General Hospital fans were stunned by the announcement that three-time Emmy winner Jonathan Jackson would be returning to the show. If fans were surprised, so was Jackson. The actor says his return came "out of the blue." In this exclusive interview, Jackson talks about being Lucky.

Plot twists don't happen only in the soaps. In a real-life plot twist, three-time Emmy award winning actor Jonathan Jackson has returned to General Hospital to reprise the role of Lucky which he created over 16 years ago. "I wasn't thinking about [returning] at all actually. It sort of came out of the blue for me," shares Jackson.

"ABC contacted my agent and said that the role of Lucky was opening up again and asked if I'd be interested in coming back…So it just came out of the blue. I didn't think that the possibility would be there in terms of coming back as Lucky."

Despite a decade away, Jackson has stepped right back in to the heart of the character. "I feel like the foundation of who Lucky is [remains] the same, in the sense that he's Luke and Laura's son. So there's some strong attributes from his dad and from his mom that he carries with him. And, there's ten years of history added on to things, but for me, the heart and soul is pretty much the same. So, it's been very smooth to come back into the character."

Jackson expressed that returning to the GH set has been great. He's glad for the familiar aspects, but also welcomes the new experiences that come with being away for a time. His warm connection with Anthony Geary-who plays Lucky's father, Luke Spencer-remains a constant.

"We've always had a really strong connection. I was eleven when I started on the show in 1993, and he was just an incredible mentor and friend, and source of protection as a young actor, as well as Genie Francis (Laura) was. So, there was a solid relationship there. And, then when I left the show, we were both intentional about staying in contact and keeping a friendship alive even though we weren't working together. We've stayed connected the whole time."

During Jackson's time away from GH, he welcomed both film and television roles. He enjoyed those experiences although the brief length of shooting schedules did not allow for the development of strong friendships. Jackson believes there's a special camaraderie with co-workers on the GH set, which comes from working together for extended periods of time. This is especially true with co-star, Becky Herbst, who plays Jackson's long-time love, Elizabeth. "In terms of just the chemistry and the dynamics of working with her [Becky], it was right there."

Jackson is unsure of the direction that the writers will take his character, but he imagines many possibilities. "[Lucky's] a detective right now, but he has a history of connection with Sonny," Jackson says. "With Luke and Sonny being friends and Luke being involved in the mob in the past…there's a lot that could happen there in terms of where the character decides to go."

In regards to the Lucky and Elizabeth romance, "with Elizabeth sleeping with Nikolas [that] sort of opens their whole relationship up in terms of not knowing what's going to happen in the future," Jackson speculates.

Though Jackson grew up in front of his daytime fans, he's gone on to have many more of his own life experiences since leaving-including becoming a dad to his two children. He draws on such experiences in order to make his character come alive. "How you live your life informs the acting and changes how you approach your work and the storylines. You have to bring yourself into the room really. The more you experience things, the more it just changes and informs what you're doing."

"Definitely, being a dad I think there's so much there to draw from especially if you're playing a dad…It's an amazing thing and being a young actor playing a son, and a kid, and then a teenager, it's fun to now be on the other side of it. Just to play a father is pretty cool."

Even with all of his childhood success, Jackson is able to remain grounded and focused on what's important to him. "For me, who you are as a person is way more important than success or anything like that, so it's very important to keep that stuff balanced."

In addition to Jackson's powerful acting abilities, he is also a talented singer, songwriter, and musician. Over the past five years, Jackson and his prolific band Enation have released five albums. The independent anthemic rock band, which has topped the iTunes rock charts, is influenced by U2, Radiohead, and Leonard Cohen.

More than merely entertaining fans, Enation's music has touched the lives of many young girls and women across the world. Their song "Permission to Dream" has become a theme song of sorts for a non-profit organization called Just Yell Fire. "[Just Yell Fire] educates girls all over the world as to how to defend themselves against predators and just basically how to protect themselves," Jackson explains. "It's something that as a band we're really passionate about in terms of equipping people in general, but especially women and young girls, equipping them to protect themselves."

The band's pairing with this charity seems almost destined. "It's an interesting story because I wrote that song before we'd ever met Dallas Jessup, who is the founder of Just Yell Fire, and she heard the song and thought that we'd written it specifically for her organization. She had even made speeches and used the term something like 'permission to dream,' which was really weird," Jackson reveals. "So, she said, 'This would be perfect' and we said, 'Yeah, absolutely! Use it for awareness for what you're doing' and it's been really cool."

In another ironic twist, one of Jackson's most memorable storylines centered around the aftermath of his GH love interest Elizabeth being raped by a predator. This storyline resonated with many viewers who wrote in to GH to share how it was a source of healing for them.

"I know that the Lucky and Elizabeth storyline impacted a lot of people and there were a lot of people that had been through some form of abuse that wrote in and would say how amazing the storyline was and how it was very healing for them," Jackson shares. "I know that it impacted people on many levels…When any part of the work, whether it's acting or music, can reach people in a certain way, that's definitely the most exciting thing."