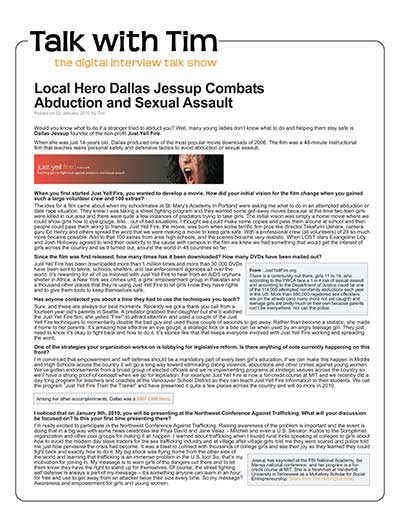 Would you know what to do if a stranger tried to abduct you? Well, many young ladies don’t know what to do and helping them stay safe is Dallas Jessup founder of the non-profit Just Yell Fire.

When she was just 14-years old, Dallas produced one of the most popular movie downloads of 2006. The film was a 48-minute instructional film that teaches teens personal safety and defensive tactics to avoid abduction or sexual assault.

When you first started Just Yell Fire, you wanted to develop a movie. How did your initial vision for the film change when you gained such a large volunteer crew and 100 extras?

The idea for a film came about when my schoolmates at St. Mary’s Academy in Portland were asking me what to do in an attempted abduction or date rape situation. They knew I was taking a street fighting program and they wanted some get-away moves because at the time two teen girls were killed in our area and there were quite a few instances of predators trying to take girls. The initial vision was simply a home movie where we could show girls how to eye gouge, bite…out of bad situations. I thought we could make some copies and pass them around at school and then people could pass them along to friends. Just Yell Fire, the movie, was born when some terrific film pros like director Takafumi Uehara, camera guru Ed Henry and others spread the word that we were making a movie to keep girls safe. With a professional crew (all volunteers) of 28 so much more became possible. Add to that 100 extras from area high schools, and the scenes became very realistic. When LOST stars Evangeline Lilly and Josh Holloway agreed to lend their celebrity to the cause with cameos in the film we knew we had something that would get the interest of girls across the country and as it turned out, around the world in 48 countries so far.

Since the film was first released, how many times has it been downloaded? How many DVDs have been mailed out?

Just Yell Fire has been downloaded more than 1 million times and more than 30,000 DVDs have been sent to teens, schools, shelters, and law enforcement agencies all over the world. It’s rewarding for all of us involved with Just Yell Fire to hear from an AIDS orphans shelter in Africa, a New York sex crimes unit, a girls’ empowerment group in Pakistan and a thousand other places that they’re using Just Yell Fire to let girls know they have rights and to give them tools to keep themselves safe.

From JustYellFire.org:
There is a community out there, girls 11 to 19, who according to the YWCA face a 1 in 4 risk of sexual assault and according to the Department of Justice could be one of the 114,000 attempted non-family abductions each year in the US. More than 550,000 registered sex offenders are on the streets (and many more not yet caught) and teenage girls are pretty much on their own because parents can’t be everywhere, nor can the police.

Has anyone contacted you about a time they had to use the techniques you teach?

Sure, and these are always our best moments. Recently we got a thank you call from a fourteen year old’s parents in Seattle. A predator grabbed their daughter but she’d watched the Just Yell Fire film; she yelled “Fire!” to attract attention and used a couple of the Just Yell Fire techniques to momentarily disable the bad guy and used those couple of seconds to get away. Rather than become a statistic, she made it home to her parents. It’s amazing how effective an eye gouge, a strategic kick or a bite can be when used by an angry teenage girl. They just need to know it’s okay to fight back and how to do it. It’s stories like that that keeps everyone involved with Just Yell Fire working and spreading the word.

Among her other accomplishments, Dallas was a 2007 CNN Hero.

One of the strategies your organization works on is lobbying for legislative reform. Is there anything of note currently happening on this front?

I’m convinced that empowerment and self defense should be a mandatory part of every teen girl’s education. If we can make this happen in Middle and High Schools across the country it will go a long way toward eliminating dating violence, abductions and other crimes against young women. We’ve gotten endorsements from a broad group of elected officials and we’re implementing programs at strategic venues across the country so we’ll have a strong proof-of-concept when we go for legislation. For example Just Yell Fire is now a for-credit course at MIT and we recently did a day-long program for teachers and coaches at the Vancouver School District so they can teach Just Yell Fire information to their students. We call the program “Just Yell Fire Train the Trainer” and have presented it quite a few places across the country and will do more in 2010.

I noticed that on January 9th, 2010, you will be presenting at the Northwest Conference Against Trafficking. What will your discussion be focused on? Is this your first time presenting there?

I’m really excited to participate in the Northwest Conference Against Trafficking. Raising awareness of the problem is important and the event is doing that in a big way with some news celebrities like Priya David and Jane Velez – Mitchell and even a U.S. Senator. Kudos to the Soroptimist organization and other cool groups for making it all happen. I learned about trafficking when I toured rural India speaking at colleges to girls about how to avoid the modern day slave traders for the sex trafficking industry and at village after village girls told me they were scared and police told me just how pervasive the crisis had become. It was a blast to connect with thousands of college girls and see their joy as they learned they could fight back and exactly how to do it. My big shock was flying home from the other side of the world and learning that trafficking is an immense problem in the U.S. too! So, that’s my motivation for joining in. My message is to warn girls of the dangers out there and to let them know they have the right to stand up for themselves. Of course, the street fighting self defense is always a part of my message – it’s something anyone can learn in an hour, for free and use to get away from an attacker twice their size every time. So my message? Awareness and empowerment for girls and young women.

Dallas, thank you for answering my questions!

Jessup has keynoted at the FBI National Academy, the Mensa national conference, and her program is a for-credit course at MIT. She is a freshman at Vanderbilt University in Tennessee as a McKelvey Scholar for Social Entrepreneurship. [More from The Huffington Post]