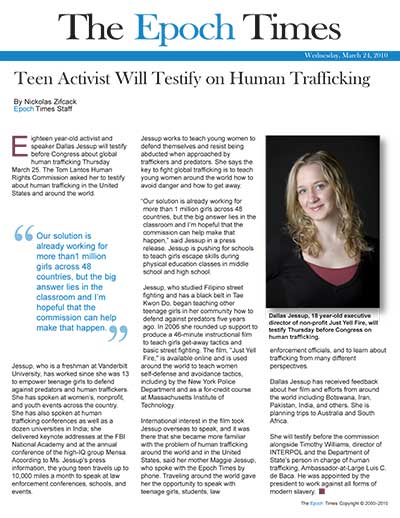 Eighteen year-old activist and speaker Dallas Jessup will testify before Congress about global human trafficking Thursday March 25. The Tom Lantos Human Rights Commission asked her to testify about human trafficking in the United States and around the world.

Jessup, who is a freshman at Vanderbilt University, has worked since she was 13 to empower teenage girls to defend against predators and human traffickers. She has spoken at women’s, nonprofit, and youth events across the country. She has also spoken at human trafficking conferences as well as a dozen universities in India; she delivered keynote addresses at the FBI National Academy and at the annual conference of the high-IQ group Mensa. According to Ms. Jessup's press information, the young teen travels up to 10,000 miles a month to speak at law enforcement conferences, schools, and events.

“Our solution is already working for more than 1 million girls across 48 countries, but the big answer lies in the classroom and I’m hopeful that the commission can help make that happen,” said Jessup in a press release. Jessup is pushing for schools to teach girls escape skills during physical education classes in middle school and high school.

Jessup, who studied Filipino street fighting and has a black belt in Tae Kwon Do, began teaching other teenage girls in her community how to defend against predators five years ago. In 2006 she rounded up support to produce a 46-minute instructional film to teach girls get-away tactics and basic street fighting. The film, "Just Yell Fire," is available online and is used around the world to teach women self-defense and avoidance tactics, including by the New York Police Department and as a for-credit course at Massachusetts Institute of Technology.

International interest in the film took Jessup overseas to speak, and it was there that she became more familiar with the problem of human trafficking around the world and in the United States, said her mother Maggie Jessup, who spoke with the Epoch Times by phone. Traveling around the world gave her the opportunity to speak with teenage girls, students, law enforcement officials, and to learn about trafficking from many different perspectives.

Dallas Jessup has received feedback about her film and efforts from around the world including Botswana, Iran, Pakistan, India, and others. She is planning trips to Australia and South Africa.

She will testify before the commission alongside Timothy Williams, director of INTERPOL and the Department of State’s person in charge of human trafficking, Ambassador-at-Large Luis C. de Baca. He was appointed by the president to work against all forms of modern slavery.