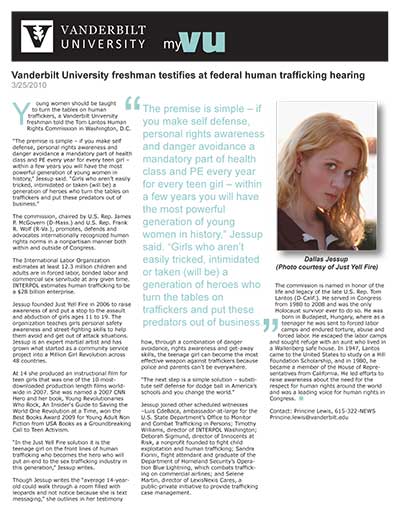 Young women should be taught to turn the tables on human traffickers, a Vanderbilt University freshman told the Tom Lantos Human Rights Commission in Washington, D.C., in prepared remarks.

The hearing on “Human Trafficking: International and National Implications” was scheduled from 10 a.m. to noon in Room 2255 of the Rayburn House Office Building. The hearing was open to media and interested public.

“The premise is simple – if you make self defense, personal rights awareness and danger avoidance a mandatory part of health class and PE every year for every teen girl – within a few years you will have the most powerful generation of young women in history,” Jessup said. “Girls who aren’t easily tricked, intimidated or taken (will be) a generation of heroes who turn the tables on traffickers and put these predators out of business.”

The commission, which is chaired by U.S. Rep. James P. McGovern (D-Mass.) and U.S. Rep. Frank R. Wolf (R-Va.), promotes, defends and advocates internationally recognized human rights norms in a nonpartisan manner both within and outside of Congress.

The International Labor Organization estimates at least 12.3 million children and adults are in forced labor, bonded labor and commercial sex servitude at any given time. INTERPOL estimates human trafficking to be a $28 billion enterprise.

Jessup founded Just Yell Fire in 2006 to raise awareness of and put a stop to the assault and abduction of girls ages 11 to 19. The organization teaches girls personal safety awareness and street-fighting skills to help them avoid and get out of attack situations. Jessup is an expert martial artist and has grown what started as a community service project into a Million Girl Revolution across 48 countries.

At 14 she produced an instructional film for teen girls that was one of the 10 most-downloaded production length films worldwide in 2007. She was named a 2007 CNN Hero and her book, Young Revolutionaries Who Rock, An Insider's Guide to Saving the World One Revolution at a Time, won the Best Books Award 2009 for Young Adult Non Fiction from USA Books as a Groundbreaking Call to Teen Activism.

“In the Just Yell Fire solution it is the teenage girl on the front lines of human trafficking who becomes the hero who will put an end to the sex trafficking industry in this generation,” Jessup writes.

Though Jessup writes the “average 14-year-old could walk through a room filled with leopards and not notice because she is text messaging,” she outlines in her testimony how, through a combination of danger avoidance, rights awareness and get-away skills, the teenage girl can become the most effective weapon against traffickers because police and parents can’t be everywhere.

“The next step is a simple solution – substitute self defense for dodge ball in America’s schools and you change the world.”

The commission is named in honor of the life and legacy of the late U.S. Rep. Tom Lantos (D-Calif.). He served in Congress from 1980 to 2008 and was the only Holocaust survivor ever to do so. He was born in Budapest, Hungary, where as a teenager he was sent to forced labor camps and endured torture, abuse and forced labor. He escaped the labor camps and sought refuge with an aunt who lived in a Wallenberg safe house. In 1947, Lantos came to the United States to study on a Hill Foundation Scholarship, and in 1980, he became a member of the House of Representatives from California. He led efforts to raise awareness about the need for the respect for human rights around the world and was a leading voice for human rights in Congress.